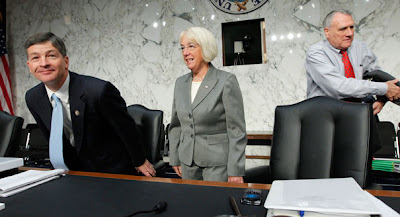 Speaking before television cameras at the supercommittee’s packed inaugural hearing in September, Sen. Patty Murray (D-Wash.) said the panel “has the opportunity to show the American people we can still come together, put politics aside, and solve a problem plaguing our country.”

Now, both parties are quickly trying to figure out how to turn the committee’s embarrassing failure into a political win for their side.

The Democratic message: We stood up to Republicans looking to gut Social Security, slash Medicare and permanently extend the Bush-era tax cuts for high income Americans.

The Republican counterattack: Democrats wanted little more than tax increases and refused to consider changes to deficit-driving health care entitlements. Both sides are positioning themselves as the party that compromised and sought a middle-ground. MORE...