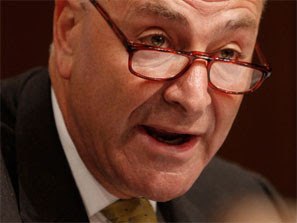 The long-simmering tension between insurers and congressional Democrats is erupting into open warfare, with lawmakers stepping up their push to revoke a key federal protection for the insurance industry.
Sen. Chuck Schumer (D-N.Y.) on Wednesday called for an amendment to the health care reform bill that would remove the long-standing antitrust exemption for insurers, echoing a push by other Democrats to crack down on the industry.

“The health insurance’s antitrust exemption is one of the worst accidents of American history," Schumer said. "It deserves a lot of the blame for the huge rise in premiums that has made health insurance so unaffordable. It is time to end this special status and bring true competition to the health insurance industry."

Sen. Patrick Leahy, chairman of the Judiciary Committee, introduced a bill last month to remove the anti-trust exemption and convened a hearing Wednesday, where Schumer called for eliminating the exemption as part of the health bill working its way through Congress.

Schumer's push comes on the heels of a controversial industry-sponsored report released over the weekend that makes the case that insurance premiums will go up by as much as $4,000 per family by 2019 if the Senate Finance Committee legislation is signed into law. The release of that report by the industry group America’s Health Insurance Plans sparked angry blowback from Democrats in both chambers.

Senate Majority Leader Harry Reid (D-Nev.) added his support to repealing the exemption at the Leahy hearing. “It’s something that should have been done a long time ago,” Reid said.

As for insurance companies, “There isn’t anything we could do to satisfy them in this health care bill. Nothing,” Reid said. “They are so anti-competitive. Why? Because they make more money than any other business in America today. . . .What a sweet deal they have.”

The exemption, known as McCarran-Ferguson, cedes regulatory control of the industry, on the business side, to individual states. But repealing the antitrust exemption would give the federal government more authority to oversee the business side of health insurance companies — something states now have the sole authority to monitor.

And the push by Reid and Schumer signals that Democrats are planning to intensify their efforts to paint insurance companies as the villains in the health reform fight, something that could prove useful as President Barack Obama and others try to rally a skeptical public around a sweeping health reform measaure.

But the idea has been raised before, and Leahy said Wednesday he scheduled the hearing before AHIP released its report.

Health insurance officials dismissed the effort as a “political ploy.”

“Health insurance is one of the most regulated industries in America at both the federal and state level,” said Robert Zirkelbach, a spokesman for America’s Health Insurance Plans. “McCarran-Ferguson has nothing to do with competition in the health insurance market. The focus on this issue is a political ploy designed to distract attention away from the real issue of rising health care costs.”

Still, the push is likely to gather momentum as Democrats try to find a way to lash back at the insurance industry — whose report was viewed as a last-minute attempt to scuttle health care reform just days before Tuesday’s critical Senate Finance Committee vote. The legislation there was approved 14-9, with Republican Sen. Olympia Snowe of Maine voting yes and giving reform efforts a boost.

Leahy’s bill would repeal the exemption established in the 1945 McCarran-Ferguson Act for any companies engaged in price fixing or bid rigging — which are both already illegal. He has introduced similar legislation in other Congresses, including a broader repeal of the underlying law. Reid is a co-sponsor of the current bill.
In the House, where Democratic leaders are exploring the issue further, Judiciary Committee Chairman John Conyers (D-Mich.) has introduced legislation that would essentially end McCarran-Ferguson and give the federal government the right to regulate insurers at the national level.

Howie P.S.: It may just be theatrics, but I think it's good theater.
Posted by Howard Martin at 5:59 AM