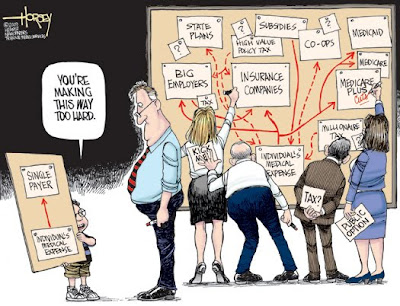 Voters in Seattle have decided to trade one perfectly good mayor for one of two novices who may or may not know how to run the city.
Now, some might argue with the "perfectly good" description of the soon-to-depart, two-term incumbent, Greg Nickels. In fact, a whole lot of people would disagree. The mayor, after all, came in third in the August primary. When an old political pro such as Nickels can't snag even a quarter of the ballots cast in a low-turnout election, something is clearly haywire in his operation.

Solid reasons for Nickels low approval are not easy to identify. Can it all be blamed on the failure to dig the city out of the snow last winter? Can it be the perennial complaints from neighborhood activists that they have been ignored? Most of what I heard from Nickels' critics was pretty vague. They just seem to dislike him for his looks and political style – too chubby and too tough on those sweetie pies on the city council.

Well, that's all water under a sinking floating bridge. We've booted out a man who could give guided tours to the labyrinth of local government and now must choose between two guys who will need a map to find the men's room on the first day in office.

Tuesday night, I went to a candidates' debate at Lincoln High School to get a look at the mayoral debutantes. As soon as I walked in the door, I bumped into Mike McGinn, the winner of the primary. He's a husky man with a neatly trimmed beard and a confident demeanor. McGinn and I talked briefly, then I went inside the auditorium and found a seat. After the candidates for city attorney finished slapping each other around, McGinn went up on stage with his opponent, Joe Mallahan. I have yet to meet Mallahan, even though we've both given a lot of volunteer time to the annual Wallingford Wurst Festival at St. Benedict School. Friends tell me he's a very nice guy. His slightly gangly body and bland features put me in mind of Bill Bradley, the ex-basketball star, ex-senator, ex-presidential candidate.

Mallahan has yet to develop Bradley-like political skills. During the debate, he made the rookie mistake of giving up 60 seconds of rebuttal time simply because he agreed with what McGinn had just said. A veteran pol would know to seize any opportunity to say a few more words to an audience of voters. When it came time for the two candidates to ask questions of each other, McGinn had a tough query ready to go while Mallahan sputtered a moment until he dredged up a complete softball: "Name one thing you've done to help those at the margins of our society." McGinn hit that one over the fence.

The rap on Mallahan for months has been that it appears he started running for mayor without giving a lot of thought to what he might do if he got elected. There's still a definite making-it-up-as-he-goes-along quality to Mallahan's presentation. But, to his credit, he'll concede he has more to learn, as he did Tuesday night when he said he'd recently been "schooled" on the issues surrounding the Ballard link to the Burke-Gilman Trail.

McGinn is much more articulate than Mallahan and Mallahan's lack of past civic involvement puts him at a disadvantage against McGinn's familiarity with grassroots city politics. Still, Mallahan was able to hold his own. Both he and McGinn were refreshingly direct and largely unrehearsed with their answers. They were not afraid to engage in rough verbal contact and throw a metaphorical elbow or two, but they did it with good humor. Compared with the wretched series of debates between Christine Gregoire and Dino Rossi in the governor's race last year, this was Lincoln and Douglas.

Mallahan stressed several times that, though he has had a career in business, he is a "social justice Democrat," an obvious attempt to establish his liberal credentials. McGinn, the former Sierra Club leader, didn't need to do that. As was demonstrated in the debate session between the eight city council candidates later in the evening, everyone must sing from the same liberal songbook in order to win public office in the Emerald City. Mallahan has learned the tune. McGinn wrote the lyrics.

What to do about the Alaska Way Viaduct is the big policy difference between the two candidates and the one they returned to over and over in the debate, no matter what question was posed. Mallahan supports the state plan to replace the viaduct with a deep bore tunnel. McGinn built his whole primary election campaign on his opposition to it.

As the two men sparred over the issue, I admit to having a perverse thought. I love the old viaduct. It allows me to zip to the airport without slogging through the clogged arteries of I-5. It gets me to the sports stadiums for games, to West Seattle for haircuts and, on sunny days, the top deck offers a gorgeous view of the harbor. Further delay and debate would keep the creaky highway in the sky in place for that much longer -- go McGinn! (Oh, sure, sooner or later an earthquake is going to knock the thing down with a tragic loss of life -- maybe mine -- but people die in lots of ridiculous ways, from bee stings to friendly fire, so going down with a crumbling freeway at least guarantees your name in the paper without the cost of an obit.)

Back to responsible reality, though, McGinn's opposition to the tunnel raises the biggest question about his capacity to be a successful mayor. He clearly has a vision for Seattle -- and there are not many automobiles in it. If he had his way, there would be no waterfront highway either above or below ground. Traffic would go to surface streets and people would start riding buses, bikes and yet-to-be-built light rail lines instead of driving gas guzzlers. Seattle would be Amsterdam with hills -- or Portland, at least. McGinn has an agenda and it has freaked out the entire political and business establishment from Olympia to the Washington Athletic Club. He is a true believer backed by a lot of true believers who have brought his campaign to the brink of success without spending much money at all.

Mallahan, meanwhile, has spent big and is heavily in debt. He calls himself a good manager, but his campaign doesn't show it. Much of his support comes from people who don't necessarily believe in him, they just want anybody but McGinn. Mallahan says he will govern as a pragmatist, which is a nice way of saying that, unlike McGinn, he hasn't developed much of an agenda.

Mallahan just might learn on the job and be able to turn his good intentions into a competent administration. On the other hand, he might be in way over his head and will leave office as befuddled as he sometimes appears to be now. McGinn, with his forceful personality and clear agenda could prove to be a transformative leader, or he could spend four years locked in a holy war with state legislators, city council members and the business community and accomplish nothing.

I can't call this one other than to say either man offers a wild roll of the dice for the citizens of Seattle. The voters wished for someone other than Greg Nickels and, Lord help us, they got their wish.

Howie P.S.: I'm made my choice, but I concede that Horsey touches all the right pressure points. For more Horsey, (on health carereform) see the image at the top.
Posted by Howard Martin at 6:25 AM