"Many side with Mallahan over tunnel issue" 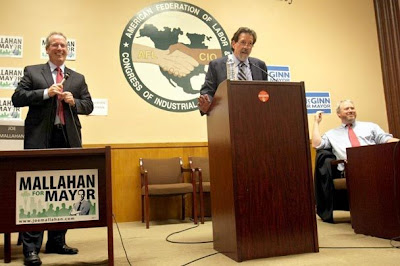 Many in Seattle's business and labor establishment have embraced Mallahan — a candidate they're just getting to know — largely out of disdain for his rival Mike McGinn's opposition to the multibillion-dollar plan to replace the Alaskan Way Viaduct with a deep-bore tunnel. For some prominent tunnel backers, however, Mallahan has become more or less the default choice in a mayor's race between two men who have never before run for public office.---Just before the August primary, Seattle power couple Judy and Jon Runstad gave $1,000 to a political-action committee whose sole purpose was to trash T-Mobile executive Joe Mallahan as unqualified to be mayor.
The short-lived PAC, Qualified Leadership for Seattle, spammed thousands of recorded calls to voters mocking Mallahan's "inexperience and shallow understanding of city issues."

It was part of an unsuccessful, last-ditch effort by union and business backers of Mayor Greg Nickels to nudge him through the primary.

Many in Seattle's business and labor establishment have embraced Mallahan — a candidate they're just getting to know — largely out of disdain for his rival Mike McGinn's opposition to the multibillion-dollar plan to replace the Alaskan Way Viaduct with a deep-bore tunnel.

Some of Mallahan's newfound allies say they've come to appreciate his business background and willingness to listen.

For some prominent tunnel backers, however, Mallahan has become more or less the default choice in a mayor's race between two men who have never before run for public office.

"I don't feel particularly strongly about Joe Mallahan, but I feel strongly about the tunnel," said Skip Kotkins, chairman and CEO of Seattle-based Skyway Luggage, who gave $500 to the Mallahan campaign. "I mean, you either want the city to go forward or you want it to go backward and die."

Kotkins, who contributed to City Councilmember Jan Drago's primary campaign for mayor, doesn't believe either McGinn or Mallahan is particularly ready to be mayor.

"Both of them are absolute rookies, and whoever wins is gonna be drinking from a fire hose," he said.

Tayloe Washburn, a land-use attorney and until recently chairman of the Greater Seattle Chamber of Commerce, called Mallahan "the less risky choice" for the future of the city.

"I originally got on board because of the tunnel," said Podlodowski, who quit her job as president of Big Brothers Big Sisters of Puget Sound to volunteer full time for the campaign.

But Podlodowski, a former Microsoft executive, said she also believes Mallahan's business experience sets him apart. "I think he's a good guy. I think he's the guy who has the smarts to understand how complex the city is as an entity."

McGinn, a former attorney and Sierra Club leader, has made opposition to the waterfront tunnel a centerpiece of his campaign. He argues the project costs too much and that Seattle should not be building new highways due to concerns about global warming.

On Monday, McGinn said he would uphold a city agreement to pay certain project costs. McGinn said he still opposes the tunnel, and would ask "tough questions."

Mallahan has argued it would be wrong to start over on a project that has been debated since the 2001 Nisqually earthquake damaged the viaduct. The next mayor's job is to try to bring in the project on budget and on time, Mallahan says, not to restart the whole discussion.

That contrast has led tunnel supporters to Mallahan's camp — including some, such as the Runstads, who just a couple months ago were helping to pay for attacks on his qualifications.

McGinn noted the irony of Mallahan getting cozy with some of the same people he'd previously labeled Nickels' "special-interest cronies."

"They're now his cronies," McGinn said.

"What can you say? Politics is strange," Judy Runstad said. She added that she didn't know the PAC she helped fund before the primary was going to focus such negative attacks on Mallahan. She believed the emphasis would be on "all the good things the mayor had done."

The Runstads long have been regarded as one of Seattle's ultimate power couples and major boosters of downtown business. She's a land-use attorney with Foster Pepper and helped write the state's Growth Management Act. He's founder, chairman and CEO of Wright Runstad, a major commercial real-estate developer.

They first met Mallahan after the primary, when he visited them at Wright Runstad's downtown offices.

"We were pleasantly surprised. He was thoughtful. He listened. He understood the kind of investments that you have to make in order to keep the city vital," Judy Runstad said. "I looked in contrast at his opponent's approach, which was adamant about the tunnel."

The same calculation has led some of Seattle's biggest labor organizations to endorse Mallahan, including some that were slamming him just months ago.

The Pacific Northwest Regional Council of Carpenters gave $5,000 before the primary to the PAC ridiculing Mallahan's qualifications. The union dropped an additional $1,500 on a related PAC that savaged T-Mobile's record of opposing union organizing.

But the carpenters now back Mallahan, and donated the maximum allowable $700 to his campaign.

"I think Mike McGinn is a great guy," said John Littel, political director for the union, who has joined Mallahan's campaign-advisory team.

"It's just the position on the tunnel is too extreme for us."

The carpenters union stands to get much of the work building forms for concrete on the tunnel project, Littel said.

Despite the trend, not everyone in the labor or business establishment has come around to Mallahan.

UFCW Local 21, which gave $5,000 to the anti-Mallahan PACs before the primary, has endorsed McGinn enthusiastically.

The union's decision was not based on the viaduct or any other single issue, spokesman Tom Geiger said. UFCW, which represents grocery, health-care and retail employees, liked McGinn's record of local activism.

"It's not about what somebody tells they're going to do, but about somebody who has demonstrated doing something," Geiger said.

Vulcan, the development company owned by billionaire Paul Allen, gave $5,000 to the anti-Mallahan effort before the primary. The company had been a big backer of Nickels, an ally of its redevelopment plans in South Lake Union.

Since the primary, Vulcan and its top executives largely have stayed out of the race, although one Vulcan attorney recently gave $150 to the McGinn campaign.
Even though the tunnel has emerged as the top issue for many Mallahan backers, Judy Runstad said she would not have actively supported just anyone who was pro-tunnel.

"If I had met him, and I had come away unimpressed ... I would have sat out the campaign. It is not just the tunnel. You have got to believe in the person."