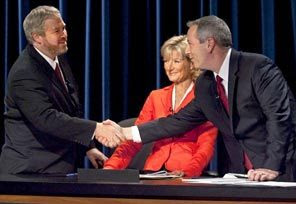 Mike McGinn, left, and Joe Mallahan traded personal accusations and harsh remarks during tonight's televised debate at KING-TV. The candidates rise to congratulate each other at the end of their debate, now 13 days before the election. Anchor Jean Enersen served as the moderator. Photo: Dean Rutz (Seattle Times)

Gloves off, McGinn, Mallahan fight about tunnel, 'trust'---In a caustic, televised showdown Wednesday, mayoral candidates Joe Mallahan and Mike McGinn debated the merits of the Alaskan Way Viaduct tunnel replacement - with Mallahan saying he didn't trust McGinn to really move forward with the project and McGinn countering that Mallahan's campaign is being paid for by corporations that will get rich from the tunnel and that he's taking cues from state lawmakers who voted to saddle Seattle taxpayers with cost overruns.
McGinn opened the KING5 debate addressing his surprise announcement Monday in which he said he'd honor a City Council decision to move forward with a $4.2 billion deep-bored tunnel replacement for the Alaskan Way Viaduct. The lawyer and environmentalist had made opposition to the tunnel a central focus of his campaign.

"I understand the role of a mayor in a Democracy. I'll stand up, I'll follow the rules," McGinn said. "I wish I had the votes to stop it, but right now I don't."

McGinn said he hadn't been expecting the council's 9-0 vote Monday, but after the decision was made he said he announced the shift in his position.

Mallahan, a T-Mobile vice president, countered that McGinn was being disingenuous, picking up a theme of recent Web ads which accuse McGinn of lying about his tunnel views.

"I don't trust that Mike really will move forward (with the tunnel). I don't think he's understood the importance on working families," Mallahan said.

McGinn returned the volley: "Joe, you don't trust me. Your campaign is funded and run by companies that stand to make millions of dollars from that tunnel," McGinn said, adding one of Mallahan's closest advisors is a state lawmaker who voted to have city taxpayers assume the cost overruns. "Joe, I'm not taking money from those folks. I don't know how we can trust you."

The tenor of the exchanges between the two political rookies - who ousted two-term incumbent Greg Nickels in the August primary - has changed dramatically in the last 10 days. Both campaigns have gone decidedly negative.

Mallahan's charges of "flip-flopping" could cut at McGinn, who until Monday was seen by some as an inflexible ideologue who wouldn't change his views. Critics say McGinn changed his stance because of poor polling; the latest survey shows that Mallahan has opened up a lead against his rival.

But Mallahan himself has changed tunes on several issues. He initially said he'd stop the $191 million Mercer Street project to turn the South Lake Union span into a two-way boulevard. Last month he said he wanted the project to go forward, but that local property owners should pay more for it. He also has criticized then spoken favorably about the city's South Lake Union streetcar. And he has sent mixed messages about voter-approved plans for a streetcar to Seattle's First Hill neighborhood.

The two men sought to contrast their experience and style.

Mallahan touted his years of business experience at major companies.

"You know, Mike just doesn't really get it," Mallahan said. "I have 20 years of business experience and 15 of really material, management roles."

He said he has a track record of bringing people together to work on tough problems and produce results.

"Mike is about things, I am about people. We have to get t his economy back on track," Mallahan said.

McGinn pointed to his campaign, boasting of "20,000 volunteer hours already" worked by people and said he made partner in his law firm and had experience supervising attorneys.

"Joe, you say I don't get it. The first responsibility of a citizen in a Democracy is to vote. You've missed more elections than you've voted in. The next responsibility is, if you care about your city, you get involved. I've done that. And look at my campaign. We've held 18 town halls...I'm my own spokesperson to the press...We've run a campaign on volunteer power. This campaign is all about people. Your campaign is about paid advisors, paid spokespeople and the big corporate powerbrokers that are running it, I get it Joe."

The two men were asked whether they thought city business taxes were too high.

"I don't think we should give tax breaks to businesses right now," considering the city's $72 million operating budget deficit, McGinn said. "We should try to reduce the regulatory burden."

Mallahan said he did think the tax burden is too much.

"I've talked to a lot of businesses...they're struggling," he said. "I have called for a repeal of the head tax. It just seems silly to me for taxing a business for adding an employee."

The candidates were asked whether they'd spend money to defend Nickels' no municipal gun ban.

"I have expressed reservations about the mayor's most recent initiative to put signs in parks, because I think it could tie up in hundreds of thousand of dollars in litigation," Mallahan said. He also complained about a "nasty robocall" McGinn's campaign placed accusing Mallahan of siding with the National Rifle Association.

McGinn said: "I support the gun ban in parks....We should defend that in court if necessary."

He also addressed the robocalls, which even some of McGinn's supporters believe went too far. "You've heard from Joe. he doesn't support the gun bans in parks, that's what my robocall said."

Mallahan responded, "People got the robocall, let's leave it at that."

Perhaps the most striking exchange between the two men occurred late in the debate over the issue of public safety.

"I have the support of the Seattle Police Officers Guild and Seattle Police Management. I also have support of the firefighters. And, I think the reason I do is they understand that I'm pragmatic and I'm going to be a principled leader. I will hold myself accountable and I will hold my police chief accountable to the people of Seattle for the behavior of our police and for crime statistics. And I look forward to working hard to drive down gun violence and I'll do that through pragmatism and principled leadership," Mallahan said.

McGinn: "Joe, you just said I don't take public safety seriously. I take it, it's serious. You know last night I was at the Rainier Club, which is one of the institutions where the wealthiest and most powerful people in this town congregate. And you said to them publicly that you would be 'present' to the people in this town who faced gun violence. Do you know where I was the night before? I was at a forum in the Central District that you cancelled out of. And I had to listen to mothers of children that were shot. I had to listen to people who had gone through incarceration and were looking for work. If you're going to say you're present, if you're going to say that I don't take it seriously, you need to show up to those forums."

Tense debate between Seattle mayor candidates McGinn, Mallahan---
Again and again in Wednesday's televised debate, Seattle mayoral candidate Mike McGinn leaned across moderator Jean Enersen, looked straight at his opponent Joe Mallahan, and called him untrustworthy and in the pocket of special interests.
Mallahan scoffed at McGinn's credentials, noting his own experience as a businessman and repeating, "Mike just doesn't get it."

He said McGinn's opposition to the tunnel as a replacement for the Alaskan Way Viaduct would "bring our economy to a screeching halt."

This was the first meeting between the candidates since McGinn's announcement Monday that instead of fighting the tunnel he would go along with the plan, if elected.

With the election 13 days away, the debate showed that the campaign between the two political newcomers has turned nasty and the accusations increasingly personal.

The debate became so heated that Mallahan began calling McGinn by his full first name, "Michael," and at one point chuckled, "Pretty good show so far, don't you think, Jean?"

In a tense discussion about guns, McGinn accused Mallahan of blowing off an event this week attended by "mothers of children who'd been shot."

The tunnel re-emerged as the campaign's defining issue in Wednesday's debate, sponsored by KING-TV and The Seattle Times.

McGinn seemed to catch Mallahan off-guard by bringing it up in his opening statement.

Instead of introducing himself as he has in the many debates between the two men, McGinn launched into an explanation of his position on the tunnel. He said he is taking a different approach because he had heard people express concern that he would be an obstructionist of the plan agreed to this year by lawmakers after eight years of debate.

On Monday, after the City Council approved an agreement to move forward with the tunnel, McGinn said he would still ask "hard questions" but not try to stop it.

In a new line of attack Wednesday, McGinn said Mallahan can't be trusted to ask tough questions about the tunnel because his supporters stand to gain from it.

"Joe, you don't trust me? Your campaign is funded and run by the companies that stand to make millions of dollars from that deep-bore tunnel on the waterfront," McGinn said. "I don't know how we can trust you to protect Seattle's interests."

He said he was confused by McGinn's statements about the tunnel. "I don't trust that he will move it forward," Mallahan said.

Mallahan said he would work to get the tunnel done on budget if he is elected. Even if the Legislature won't remove the clause calling on Seattle to pay for cost overruns on the project, the tunnel should be built, he said.

"Sometimes a leader has to stand up and say, 'Hey, it's time to move forward.' "

McGinn laid into Mallahan for his voting record — he's missed 13 elections since 2001 — and his expensive campaign, which is run by a team of paid political advisers and funded by unions, business groups and $230,000 of Mallahan's own money. McGinn boasted that his campaign is volunteer-run. Mallahan countered that McGinn has "zero management experience and zero budget experience."

Mallahan is a T-Mobile vice president, and McGinn, an attorney, founded a nonprofit.

Mallahan painted McGinn as anti-road when McGinn said he supports four lanes of traffic and two lanes of light rail across the new Highway 520 bridge. The current plan has six lanes of traffic, and light rail would go across Interstate 90 instead.

Mallahan didn't answer a question about which option he supports for an exit at the west end of a new 520 bridge.

He also skipped a question about the "missing link" of the Burke-Gilman Trail through the Ballard neighborhood. Business owners along the trail have sued to stop the trail's completion through Ballard. McGinn wants to complete the trail, but Mallahan said, "That link is now under litigation. ... To take a position would be bad policy."