Mallahan and McGinn argue about a tunnel and a poll 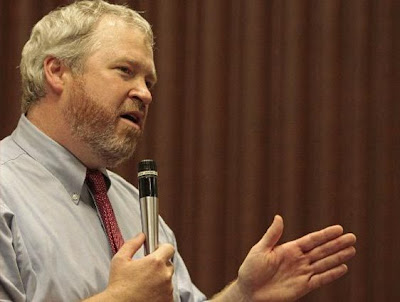 Joe Mallahan accused his opponent in the Seattle mayor's race, Mike McGinn, of "dishonest tactics" this week because of a telephone poll McGinn is running. Mallahan says the poll isn't really seeking voters' opinions about the proposed deep-bore tunnel on the waterfront. Mallahan says the poll is a "push poll" that intends to persuade voters by presenting negative information to sway voters' opinions.
McGinn said this morning at a news conference that the poll is legitimate. "It was research," he said.

McGinn's campaign released the poll questions to me this afternoon. The poll tests two statements about the tunnel, both of which are based on some assumptions the McGinn campaign has made.

The first is about taxes. The poll says:

Those are the taxes that have been proposed for a tunnel, but nothing's in writing, and the 2010 budget doesn't propose any of those fees.

Then the poll says:

In addition to raising taxes, the tunnel plan has been criticized for proposing tolls of six dollars, each way, on the new highway.

No one has figured out the specifics of proposed tolling on the road, but the Washington Department of Transportation estimates tolling at $3 each way. (The Seattle PI reported yesterday that WSDOT is consideringtolls as high as $4.20.)McGinn's campaign has analyzed WSDOT's data and believes the road won't carry as many cars as projected, so it believes tolls of as much as $6 each way will be necessary.
McGinn said he hasn't yet seen results of the poll.

Mike McGinn slams the city's contribution to the tunnel—$930 million—as the Largest Tax Increase in Seattle History. But McGinn's preferred choice, the surface/transit option, would also require similar tax increases.
Even if surface/transit wins, the city will still have to rebuild the seawall, relocate utilities from the viaduct, and redevelop the waterfront.

Mayor Greg Nickels recently released his budget—his last as mayor—which described how the city will pay for their share of the tunnel:

• In all, the city transportation department would spend $375 million toward a sea wall, promenade and streets by 2015, mostly in the later years.

Nickels assumes the city could use $118 million in state grants to reduce residents' costs. Another $155 million in existing and future city bond money would be used — a debt later generations must pay.

Asked if debt would hinder the ability of future leaders to build mobility projects, Deputy Mayor Tim Ceis said, "It would be fiscally irresponsible to pay for it out of cash," because the highway and waterfront structures will last for decades.

• City Light ratepayers would spend $128 million on tunnel-related utility relocations by 2015. But next year's piece is only $5.4 million, which Finance Director Dwight Dively called "minuscule" compared with next year's revenues from power rates. He acknowledged the tunnel project could affect power bills later.

Paying for the utility relocation costs will probably raise City Light rates, and costs associated with rebuilding the waterfront will also be a part of the city's transportation budget for years to come. Should McGinn stop the tunnel, we'll still have to do pay for this stuff.

Perhaps the right question to ask McGinn would be: How would you pay for your own plan?

Howie P.S.: Check out the comments on both stories.
Posted by Howard Martin at 5:36 PM