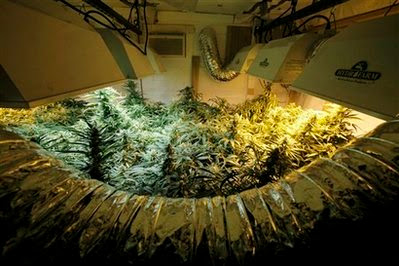 Marijuana plants are shown Tuesday, Sept. 15, 2009, in Seattle. The marijuana is distributed to members of a cooperative of medical patients who have received doctor's authorization to use the drug to treat their illnesses, such as AIDS and multiple sclerosis. Unlike several other states which permit marijuana sales to patients, Washington requires patients to grow marijuana themselves or designate a caregiver to grow it for them. (AP Photo/Ted S. Warren)

Pot-smoking patients or their sanctioned suppliers should not be targeted for federal prosecution in states that allow medical marijuana, prosecutors were told Monday in a new policy memo issued by the Justice Department.

Under the policy spelled out in a three-page legal memo, federal prosecutors are being told it is not a good use of their time to arrest people who use or provide medical marijuana in strict compliance with state law.
The guidelines issued by the department do, however, make it clear that federal agents will go after people whose marijuana distribution goes beyond what is permitted under state law or use medical marijuana as a cover for other crimes.

The memo advises prosecutors they "should not focus federal resources in your states on individuals whose actions are in clear and unambiguous compliance with existing state laws providing for the medical use of marijuana."

The new policy is a significant departure from the Bush administration, which insisted it would continue to enforce federal anti-pot laws regardless of state codes.

"It will not be a priority to use federal resources to prosecute patients with serious illnesses or their caregivers who are complying with state laws on medical marijuana, but we will not tolerate drug traffickers who hide behind claims of compliance with state law to mask activities that are clearly illegal," Attorney General Eric Holder said in a statement.

California stands out among those for the widespread presence of dispensaries — businesses that sell marijuana and even advertise their services. Colorado also has several dispensaries, and Rhode Island and New Mexico are in the process of licensing providers, according to the Marijuana Policy Project, a group that promotes the decriminalization of marijuana use.

Advocates say marijuana is effective in treating chronic pain and nausea, among other ailments.

Holder said in March that he wanted federal law enforcement officials to pursue those who violate both federal and state law, but it has not been clear how that goal would be put into practice.

The memo spelling out the policy was sent Monday to federal prosecutors in the 14 states, and also to top officials at the FBI and Drug Enforcement Administration.

The memo written by Deputy Attorney General David Ogden emphasizes that prosecutors have wide discretion in choosing which cases to pursue, and says it is not a good use of federal manpower to prosecute those who are without a doubt in compliance with state law.

"This is a major step forward," said Bruce Mirken, communications director for the Marijuana Policy Project. "This change in policy moves the federal government dramatically toward respecting scientific and practical reality."

At the same time, officials said, the government will still prosecute those who use medical marijuana as a cover for other illegal activity.

In particular, the memo urges prosecutors to pursue marijuana cases which involve violence, the illegal use of firearms, selling pot to minors, money laundering or involvement in other crimes.

And while the policy memo describes a change in priorities away from prosecuting medical marijuana cases, it does not rule out the possibility that the federal government could still prosecute someone whose activities are allowed under state law.

The memo, officials said, is designed to give a sense of prosecutorial priorities to U.S. attorneys in the states that allow medical marijuana. It notes that pot sales in the United States are the largest source of money for violent Mexican drug cartels, but adds that federal law enforcement agencies have limited resources.

Medical marijuana advocates have been anxious to see exactly how the administration would implement candidate Barack Obama's repeated promises to change the policy in situations in which state laws allow the use of medical marijuana.
Soon after Obama took office, DEA agents raided four dispensaries in Los Angeles, prompting confusion about the government's plans.

Posted by Howard Martin at 8:58 AM