One of the monotonously familiar knocks against bloggers like me is that we are just partisan shills, but if and when we are, at least we’re honest about it. So when an editorial board like the Times’ pretends that its endorsements come through candidate interviews and informed discourse, when in fact they merely reflect the anti-labor, anti-tax, pro-Republican views of their boss… well then… the entire endorsement process becomes just as much a lie as those of Hutchison which their paper has chosen to cover up.

I was on KUOW this morning with Seattle Times editorial board member Lynne Varner.
We were talking abbout Susan Hutchison and Varner said Hutchison’s GOP allegiances weren’t a problem, it’s more that Hutchison is being disingenuous about it.

I couldn’t agree more. It’s like the old Watergate adage, it’s not the crime, it’s the coverup. Being a Republican isn’t a crime (although this is King County). But seriously, Hutchison’s evasion is the problem.

And I said so on this morning’s show, seconding Varner, pointing out that Hutchison isn’t only being disingenuous, she’s being dishonest. Last night on KCTS , when asked why she donated to a hyper conservative like Mike Huckabee, she told an inncoent-ish story about first hearing of Huckabee in the fall of 2007 from a political friend. (Hutchison wasn’t political she said because she was just coming off being a journalist). The friend, she said, told her about Huckabee and invited her to a Huckabee lunch. Hutchison said she didn’t go to the lunch, but wrote a check for $500 anyway.

Okay, that’s weird in itself: She wrote a check for $500 based on a friend’s recommendation without seeing Huckabee speak?

Yep. It is weird. In fact, its not true. She’d already seen Huckabee speak. And she already had a high opinion of him. Hutchison emceed a 2006 dinner for the Wahsington Policy Center, the local conservative think tank, where Huckabee was the keynote speaker.

A year later, in September 2007, Hutchison emceed the WPC’s dinner again (Jeb Bush was the keynote.) And at that dinner, Hutchison kicked off her speech with a rave about Huckabee. Here’s the video. Go to the seven minute mark and you’ll hear her heap praise on Huckabee.

“As you know if you’ve been here before, our speakers inform, inspire and predict the future. Anyone who was here last year is not surprised that Mike Huckabee is perfroming well in the presidential race for the Republican primary. You may recall that last year Mike warned of the infrastructure problems in his own state and all through the country and sure enough we had a tragedy in Minnesota and now infrastructure is one of the biggest issues that we face today. And that started last year. We were informed by Mike Huckabee.”

Varner must have cringed when I told this story. The Seattle Times endorsed Hutchison this afternoon. 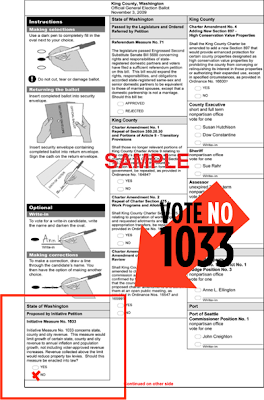 Posted by Howard Martin at 7:50 PM