"Will KPTK step up to radio reality?" 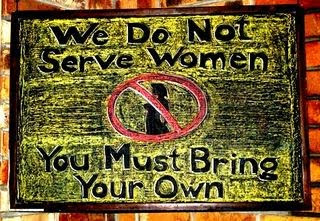 Seattle liberal-interest money groups have long talked up the possibility of buying a radio station to counter the overwhelmingly conservative news talk stations in a market that's overwhelmingly liberal.

That's probably not a good idea, since it's been proven many times that radio should be left to radio professionals...Oh wait, that's right, a generation of professionals put radio where it is today: in the shit.

KVI, KTTH, and KKOL have always been rock-ribbed conservative; while KIRO had a few progressives. That's over. There are no liberals there any more- Dave Ross (m-f, 9a-12p) comes close: he's a

left-leaning moderate in the old Dan Evans mode. They recently added the right-wing, but live & local Frank Shiers, (7-11p) and a forgettable religious right-winger on the late night (11p-1a) whose show they don't even bother to mention on their website.

(We hear the studiously inane Ron & Don Show. KIROFM m-f, 3-7p) are in the sights of Bonneville programmers: they're hoping to inject some news-meat into the troubled show. Can the Curly & Moe of drivetime pull off pith? We doubt it).

No matter what former King of Seattle Talk Radio Dori Monson claims, KIROFM's PPM numbers haven't budged: they're still number 20 in the market. Even their own right-wing talker, KTTH, boosted by Limbaugh and Beck still pulls better numbers in the rankings- it's still 19th.

(Fun, but sad, fact: KKOL's Mike Siegel moved from morning drive to evening drive (!) and nobody knew. How the mighty has fallen- Siegel once owned Seattle talk. KKOL is so unlistened-to, it's not on any rating list).

Music rules now, but KOMO showed well again, and public radio news talker KUOW gained impressively in the new book, again proving that listeners in Seattle can handle smart radio that doesn't yell at you. It's a market whose audience could be wider than the over-50 white males talk radio has been catering to since its inception. You know, like women, fr'instance?

It's counterintuitive that a liberal talk station wouldn't work here. But we'd posit: it's never really been tried. KPTK, the CBS-owned progressive station has ventured very little into the station. It's run by robots who beep down cheap, syndicated shows from the satellites. CBS is loving their kicking-ass music stations (KMPS, KJAQ, KZOK) and have laid-off almost everybody at AM1090.

It's got a great line-up of the best progressive talkers: Stephanie Miller, Thom Hartmann, Ed Schultz, Ron Reagan, Randi Rhodes... but obviously, that's not enough. There's nothing giving the station a local connection; nothing to make listeners loyal to AM1090.

(We dream of talk star David Goldstein (KPTK m-f, 3-6p) doing a live remote from Les Schwab in Lynnwood, and taking the payola in frozen meat).

We know that running a station as a no-risk, low-overhead, low-profit money generator has been in vogue, but we gotta ask: how's that been working for you?

By our lights, not well. KPTK is scraping the basement with numbers even lower than KVI's, even.OK, we know that radio in general is still swan diving after going lower in revenues than anyone thought possible. It's also true that KIRO, with all its local jocks, is in the shit-can too.

You'd think KPTK would have little to lose.
We're just listeners around here, we couldn't possibly know as much as the suits who have done this to radio, but isn't it time to try something different?

Posted by Howard Martin at 6:03 AM

Email ThisBlogThis!Share to TwitterShare to FacebookShare to Pinterest
Labels: air america kptk, am1090