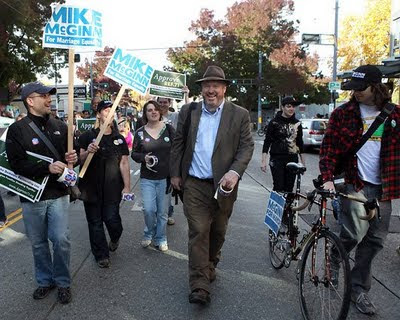 Mike McGinn having based his entire campaign on the deep bore tunnel and then lost the debate on whether to get on with building the deep bore tunnel to replace the viaduct now turns to pushing his rather hysterical argument about the possible cost overruns.
Fuck the facts. Here is a interview done on the Dave Ross show on KIRO involving Representative Judy Clibborn, the author of the language in the legislative bill, dealing with tunnel cost overruns.

Dave Ross: The amendment that you wrote does not in fact have the force of law? So does it or not?
Rep. Judy Clibborn: I don't think it does.
Ross: Then why did you write it?
Clibborn: Ok, I wrote it because there were a number of people who were very uncomfortable, I wouldn't say a large number, but a few people who felt that... those people who benefited from the tunnel, mainly those people on the waterfront should in some way be held on the hook for cost overruns.
Ross: I get why you would want to write it, I'm just surprised you would write something that, to me, looks like it would have the force of law but which doesn't because that would seem to be trying to trick people into thinking they're protected when they're not.
Clibborn: It was a way to get three more votes and get the tunnel bill passed.

Okay there are going to be cost overruns. Grow the fuck up people. Any politician worth their salt or any brain dead engineer knows that. Why, Because huge billion dollar government capital projects and your own home remodel always cost more then you think they will. The main problem here is Joe Mallahan realizes that the cost overruns will be a issue to deal with and is willing to deal with it at the time it happens. He knows that the State, no matter what the law says, cannot impose a tax on the city without further negotiations and agreement.

McGinn meanwhile uses the issue as a tool to frighten people into voting for him even though it stalls or stops progress on finally fixing one of the biggest tansportation problems the region has on the table. The candidates stances on this issue show Mallahan as a reality based business man and McGinn as the opportunistic policy wonk who strikes me as knowing little about running a business. Just what Seattle needs, another inbred anti-business policy wonk to discuss the finer points of the cosmic effect on the average citizen of ever doing anything from start to finish ever. Let's fucking talk over the fine points Ad nauseam instead of being leaders who make big decisions.

Something tells me that voters will soon be thinking, if their not already, that Greg Nickels wasn't so bad after all. But then again he had to go because of the totally unreasonable stand on dealing with nightlife and clubs didn't he?
The deep bore tunnel is a 100 year fix, it's not a small deal. It cost money. But in 10 years your going to love that someone had the leadership to get it done and it will turn out to be a great deal for the taxpayers. No matter what McGinn and the milk toast peer driven lefty talk it to death blogosphere thinks now.

Howie P.S.: I'm a lefty and I have this website, but I'm not sipping the Kool-Aid on this issue. I received a phone call last night from a McGinn volunteer who warned of a "$15,000" tab for every Seattle resident to pay for the cost overrun. The author (above) needs to work on grammar and punctuation, but his point is well-taken.
Posted by Howard Martin at 6:23 AM