"If You Live in a Home with a View, Chances Are You're a Mallahan Supporter" 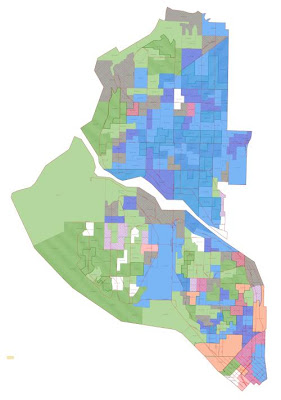 Look at this map. (Here it is with streets.) This is the 36th Legislative District—Discovery Park, Magnolia, Golden Gardens, Ballard, Fremont, Greenwood, Phinney Ridge, Green Lake. (That squared off white blotch in the center up top is the lake.) There's a room with huge maps like this hanging on the walls at McGinn for Mayor headquarters—the six legislative districts in Seattle. Here, the 36th has been divided up by precinct, and color-coded according to how each precinct voted in the mayor's race in the primary. Green is Joe Mallahan, blue is Mike McGinn, and pink-orange is Nickels.

Howie P.S.: I'm thinking this is not intended as a compliment to Mallahan, but it could just be my SLOG-distrust. Geov Parrish (EatTheState) reviews the negatives of both candidates and is upfront about his preference. It should be noted that this was written before McGinn's position on the tunnel evolved to its current state. KUOW has posted this profile of Mallahan. Today, they did the same for Mike McGinn. In Seattle, KUOW is a monster, audience-wise, so we should pay attention to their coverage.
Posted by Howard Martin at 10:25 AM