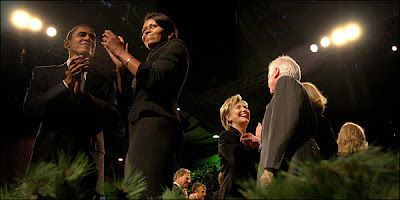 In the space of an hour this weekend, Sens. Hillary Rodham Clinton (N.Y.) and Barack Obama (Ill.), using some of their most pointed and forceful rhetoric of the campaign, framed in stark terms the choice for Democrats deciding their party's presidential nomination.

Clinton gave a strong speech at the Iowa Democratic Party's annual Jefferson-Jackson Dinner late Saturday night, but Obama, criticized for occasional lackluster performances on the campaign trail, delivered one of his most focused and powerful addresses. In the view of many in the audience, he emerged as the oratorical winner at the biggest Democratic political event in Iowa before the state's January caucuses.
Obama said his candidacy could produce a new Democratic majority capable of breaking the gridlock and polarization that have plagued Washington for a decade or more. "The same old Washington textbook campaigns just won't do it in this election," he said. "That's why not answering questions because we're afraid our answers won't be popular just won't do it."

But Clinton, the front-runner for the nomination, used the same event to fire back at rivals such as Obama, who have attacked her with increasing sharpness over the past two weeks. She defended herself as someone who has stood strongly for and with middle-class voters and against the policies of President Bush and the Republicans.

Clinton argued that she has a combination of strength, experience and values that none of her rivals can match. "We must nominate a nominee who's been tested and elect a president who is ready to lead on Day One," she said.

Obama and Clinton were at it again Sunday, this time over the future of Social Security. On NBC's "Meet the Press," Obama said again that he would favor raising the cap on payroll taxes to help alleviate future financial problems for the government retirement system. Clinton, campaigning in Waterloo, said she isn't yet prepared to endorse that idea. She told an Iowa voter recently that she was open to taking that step but said in a debate that she was not advocating it.

Iowa's caucuses are 53 days away and, while Clinton holds a substantial lead in national polls, in this state she, Obama and former senator John Edwards (N.C.) are in a competitive three-way contest.

The Jefferson-Jackson Dinner drew an estimated 9,000 Democratic activists and has marked a turning point in the battle for Iowa in recent presidential campaigns. Every one of the candidates saw it as an opportunity to gain an advantage in the final weeks of campaigning. For Obama and Clinton, the last speakers, it was an opportunity to sharpen an argument that has been brewing for weeks.

Edwards was the first of six presidential candidates to speak, and he tried to elbow his way into the Clinton-Obama rivalry with a populist call for Democrats to stand up against corporate interests and cleanse Washington of the corrupting influence of money and power.

"Washington is awash with corporate money, with lobbyists who pass it out, with candidates who ask for it," he said as he called on Democrats to show some backbone in challenging the status quo.

The length of the evening tried the patience of the Democratic activists, who milled about during many of the speeches. But the crowd snapped back to attention when Clinton arrived on stage about 10:40 p.m. Central time, and remained riveted through Obama's presentation, which ended close to 11:30 p.m.

Neither mentioned the other by name, but it was clear to everyone in the audience that they were aiming at one another. Obama has accused Clinton of not being clear on the issues. Her response Saturday was to say: "There are some who will say they don't know where I stand. Well, I think you know better than that. I stand where I have stood for 35 years. I stand with you, and with your children and with every American who needs a fighter in their corner for a better life."

Obama was even more provocative in his rhetoric. To applause, he said, "I am running for president because I am sick and tired of Democrats thinking the only way to look tough on national security is by talking and acting and voting like George Bush Republicans." Asked Sunday on NBC to whom he was referring, Obama singled out Clinton for a recent vote on Iran and said many Democrats, including Clinton, had supported the 2002 Iraq war resolution.

Edwards was less pointed Saturday in his criticism of Clinton than he has been recently, but by Sunday he was back to attacking her directly. During a news conference in Des Moines, a reporter pointed out to Edwards that Clinton had said that it's clear where she stands.

"Where is that?" Edwards responded.

"What do you think?" the reporter asked.

Most of those in the audience Saturday night already knew whom they would back in January, but not all. Barbara and Mike Donnelly arrived not certain whom they would support in the Democratic caucuses.

The Oskaloosa couple left with colorful glow necklaces, handed out by Obama's campaign, peeking out from under their coats.

"We just think he's a very strong character," Barbara Donnelly said. Obama's speech "crystallized it for me," Mike Donnelly said. "I like Hillary and Edwards. But there was something about Barack tonight. He was so forceful."
Randy Naber of Muscatine left the auditorium still committed to Edwards and fond of Clinton, but like others, he was impressed with Obama's performance. Obama, he said, "really surprised me tonight."

That was good news for the Obama campaign, but the weekend showed just how intense the rest of the battle for the nomination will be.

Posted by Howard Martin at 4:54 AM