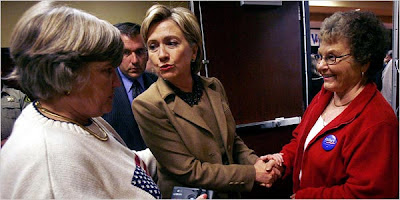 Senator Hillary Rodham Clinton of New York has nearly doubled the size of her staff in Iowa and has substantially increased her advertising here as her campaign reinforces its effort to prevent Democrats from coalescing around a single alternative to her candidacy.
In the four weeks between Thanksgiving and Christmas, Mrs. Clinton, whose campaign has been on the defensive lately because of her own missteps and increasingly aggressive attacks from her rivals, is moving to double or triple the amount of time she has spent here in recent months. Seldom will a day go by, aides said, when either she or former President Bill Clinton will not be on some patch of Iowa soil trying to solidify her support and win over an unusually high number of uncommitted voters.

“We’re going to begin using all the assets we have,” said Tom Vilsack, a former governor of Iowa who serves as co-chairman of the Clinton campaign. “We haven’t been bashful about asking for the moon here.”

The intense attention is the latest indication of the Clinton campaign’s worry about establishing dominance in Iowa — the opening contest in the race for the Democratic presidential nomination — to match the strength she has shown in national polls. Senator Barack Obama of Illinois and former Senator John Edwards of North Carolina have waged spirited campaigns here, taking advantage of what polls suggest is unease with Mrs. Clinton among many voters.

The maneuvering here is critical, because Mrs. Clinton’s aides, along with many Democrats not associated with her campaign, believe that her momentum will be difficult to slow if she wins in Iowa; polls suggest that she is strong in New Hampshire. The Clinton campaign has been flying in operatives from across the country to bolster the Iowa effort.

Complicating the matter even more, the campaigns of Gov. Bill Richardson of New Mexico and Senators Joseph R. Biden Jr. of Delaware and Christopher J. Dodd of Connecticut also have the potential to sway the race. If candidates do not reach a 15 percent threshold in each of the 1,784 precinct caucuses on Jan. 3, their supporters make a second choice, a procedure that Mrs. Clinton’s aides fear could favor Mr. Edwards or Mr. Obama.

In the final seven weeks of the race, all campaigns are increasing their efforts here, placing new advertisements and investing more resources. To fight the new push by the Clinton campaign, rivals are also planning to spend nearly all their time in Iowa in December, hoping to raise doubts about her candidacy. While the Obama and Edwards campaigns have been gradually building for months toward this moment, the Clinton campaign has bolstered its activity here in recent weeks, hiring 100 new workers to concentrate on a person-to-person drive to explain the quirky process of the caucuses, with a goal of having 50,000 in-home visits by Christmas.

More than 60 percent of those who have identified themselves as Clinton supporters, senior strategists say, have never participated in the Iowa caucuses. It is a far higher share than the campaign had been anticipating, which suggests that many of the reliable rank-and-file Democrats have chosen another candidate. So the Clinton campaign is working to expand its universe of supporters to women who have never participated.

“No one is going to give Hillary Clinton this nomination,” said Terry McAuliffe, the national chairman of her campaign, who has traveled to Iowa nearly once a week for months. “She’s going to have to earn it.”

By this week, the Clinton campaign had completed opening 34 offices across the state, arriving in many cities more than two months behind the local operatives for Mr. Obama or Mr. Edwards. Last week, the Clinton campaign’s national headquarters sent a top communications operative to Iowa and hired eight deputies charged solely with drumming up media coverage in smaller cities across the state.

At the same time, Mr. Clinton is playing an increasingly larger role in Iowa. After never competing in the Iowa caucuses during his own presidential races, Mr. Clinton has sought to learn the nuts and bolts of the system and has studied regions where he believes his appearances could be most helpful.

Mr. Clinton was sent last week to the western Iowa towns of Onawa and Glenwood, where he created a stir and drew a large crowd of local Democrats.

“Clearly they weren’t all there because they support Hillary,” said Kenneth Mertes, the Democratic chairman in Monona County. “But he is a very persuasive speaker and can sway the voters who come to see him just out of curiosity.”

A New York Times/CBS News poll this month found that 38 percent of Iowa voters who are likely to participate in the caucuses said the former president’s involvement in the race would make them more likely to support Mrs. Clinton’s campaign. But 55 percent said it would make no difference in deciding which Democrat to support.

Mr. Clinton is expected to concentrate on rural areas and smaller cities, where campaign aides believe that Mrs. Clinton needs a boost. (A sign on the office door of Teresa Vilmain, the state director of the Clinton campaign, says: “Hillary is needed in rural Iowa.”) Already, Mr. Clinton has helped recruit precinct captains and has worked to persuade small clutches of undecided voters, but aides say his involvement will increase significantly after Thanksgiving.

With new anxieties about Iowa and a sense of heightened importance in the vote’s outcome, the Clinton campaign sent several senior strategists here, including Karen Hicks, who is known as one of the party’s top get-out-the-vote specialists. To compete with the strong organizations of Mr. Edwards and Mr. Obama, the Clinton campaign held a job fair in Washington to recruit many of the 100 new workers, but it remains an open question whether the late influx of young aides will be able to build the relationships with Iowa voters that other campaigns have been working on for months.

The Clinton campaign’s efforts to bolster its organization here come in the wake of a challenging period in the state; aides conceded to planting questions in Iowa audiences and struggled to explain whether a tip was left for a waitress who served Mrs. Clinton during a recent visit. Three weeks ago, Patti Solis Doyle, the national campaign manager, traveled here to appraise Mrs. Clinton’s efforts. A strategy was devised to have the Clintons — and many high-profile surrogates — blanket the state in December.

Former Senator Bob Kerrey of Nebraska is expected to endorse her candidacy and travel through the state on her behalf in the coming weeks. Former Representative Richard A. Gephardt of Missouri, a presidential candidate four years ago, is also scheduled to spend time in Iowa and urge his former supporters to sign on with Mrs. Clinton.

And when Mrs. Clinton returns Monday to Iowa, aides said, she will begin concentrating on smaller audiences and intimate sessions with voters in outlying areas of the state. One stop on the itinerary, for example, is Tama, population 2,700.
“At the beginning, she didn’t understand the whole notion of relationship building,” said Mr. Vilsack, the former Iowa governor, who often travels the state with Mrs. Clinton and introduces her to voters. “She now gets it. She now understands the psyche of this process.”

Howie P.S.: In these smaller sessions, I wonder if she will be pressed to answer the "pearls or diamonds?" question.
Posted by Howard Martin at 9:20 AM