John Edwards: 'Mudslinging' against Clinton: This is 'milquetoast' 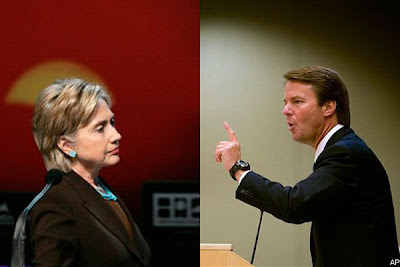 Former Sen. John Edwards, who ran for president in 2004 with an unfailingly upbeat campaign and then joined the ticket of his party’s nominee, has come back this year with a fighting edge – an edge which Sen. Hillary Clinton of New York has likened to “throwing mud… right out of the Republican playbook.’’
“I don’t think so,’’ Edwards said of the complaint which Clinton lodged about his criticism for her in the debate of the Democrat candidates in Las Vegas last week. “The idea that that this is mudslinging... We’re talking about substantive issues of war,’’ Edwards said on CBS News’ Face the Nation today. “If anybody, including Sen. Clinton, thinks this is mudslinging – this is milquetoast, compared to what we’re going to see next fall.’’

The question remains of what impact a primary campaign like this will have on the November 2008 election. Some of what Edwards has to say about Clinton – calling her part of a political culture of corruption – is the stuff of campaign commercials. Should Clinton win the nomination, words like Edwards’ are likely to recycle through the campaign with 1,500 points of TV ad-purchasing power behind them.

Edwards stopped short today of calling Clinton unelectable – “I wouldn’t say those things,’’ the North Carolinian said. “As to who can best be elected… I’m the candidate who actually has won in a red state… I think I can go any place in the country and compete, and I’ll let Sen. Clinton make the case for herself.’’

But Edwards was even more pointed about Clinton's mudslinging charge in an interview today with Wolf Blitzer on CNN's Late Edition. "It's complete nonsense... This is not mud... It's absurd.''

It's also "a huge mistake'' to confuse anger with passion, Edwards said on CNN, maintaining that he is not angry, but is the same candidate he was in 2004, and he is running a passionate campaign. That passion has prompted some tough talk about the party's frontrunner.

“No, I’ve never said that,’’ said Edwards, saying that “very good people get pulled into’’ the influence-peddling culture of Washington. “I myself am guilty… I’ve turned my head myself,’’ he said. But “I do believe that we have to weed that corruption out of the system and make it work for the majority of Americans.’’

On Face the Nation, Edwards spoke of the money of the pharmaceutical companies in campaigns, and Schieffer asked: What’s the difference between taking money from drug companies and from trial lawyers – as Edwards, who made his wealth as a trial lawyer, does.

“I don’t claim purity. And I don’t claim holier than thou,’’ Edwards said. “I’ve raised over $30 million in this campaign.

“It is true that I’ve never taken money from a Washington lobbyist…. or from a PAC,’’ he said. “Lobbyists, registered lobbyists in Washington, their job is to peddle influence.’’

But he’s not saying that trial lawyers have no influence in Washington, is he?

“Lord no… far from it,’’ he said. “What I would say is, we ought to take all of their money and influence out…. The net result is their influence is way out of proportion to the influence that ordinary Americans have.’’

Forty-six days from the Iowa caucuses, with Clinton, Edwards and Sen. Barack Obama of Illinois running competitively among potential caucus-goers in Iowa’s polls, Edwards was asked how important a victory there on Jan. 3 will be.
“I think anybody who doesn’t do well in Iowa is going to have a struggle,’’ Edwards said. “It’s basically a tie there, at least according to the public polls… I think it’s going to be a very intense campaigning process… I’ve lived through this before…

Then, there is that question of who can parlay an Iowa victory into an election to the White House.

“I think they’re looking for the candidate who they believe is ready to be president,’’ Edwards said, without mentioning Clinton by name. “And third, they are looking for somebody who can win in a general election, because they don’t want another eight years of a Republican White House.’’

Howie P.S. Elizabeth Edwards had this to say in New Hampshire:

"Right now we also have a really important ceiling to break and that is the influence in our lives of money," in regards to the influence of lobbyist money in politics. "Right now the ceiling on top of us is not glass, it's made of money. And we need to break it."

Posted by Howard Martin at 8:55 AM