"Oprah to stump for Obama" (UPDATED)

UPDATE: It will be interesting to see if some "dirt" on Oprah now enters the media landscape, as some political observers are predicting. 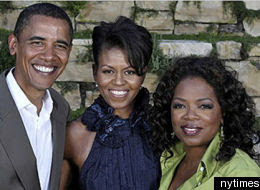 Obama made the disclosure while working a crowd at Central High School here, after delivering an education policy speech. A man, Ralph Hoagland, asked Obama—who was mingling and shaking hands-- if Oprah was going to stump for Obama in New Hampshire.

“First she’s coming to Iowa,” Obama told Hoagland, who in 1963 was a co-founder of what is now the giant CVS pharmacy chain. “But we’ll talk about it. We’ll get her up here.”

A woman piped up. “We need her here.”

“Is she thinking of not coming up to New Hampshire?” Hoagland asked?

Obama replied, “No, no no. We’re just doing it one state at a time.”

During these mix and mingle events, it is common for reporters and photographers to follow Obama around as he works the room or a rope line and listen in as he chats.

I caught up with Hoagland after his Obama encounter. He is a member of Obama’s Northeast Steering Group, which is heavily involved in fund-raising. He hopes to bundle together $100,000 for Obama, with some of his efforts targeted to a small dinner with Obama on Dec. 2 in New York.

Oprah Winfrey can help, Hoagland said, “because I think that Oprah can say to women ‘you do not have to vote for the first woman president. Vote for what you need.”

The Obama campaign has long hoped Winfrey, who hosted a massive fund-raiser for Obama would be willing to go on the stump for him. Winfrey opened her Montecito, Calif. estate to Obama on Sept. 8 for a star-studded fund-raiser that took in about $3 million for Obama.