"For Edwards, a Man on the Run, Time Is No Ally" 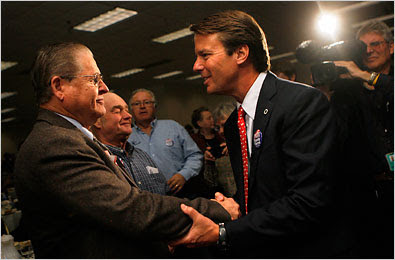 Night was falling, and John Edwards was an hour late for a campaign event at a recreation center in Williamsburg, Iowa.

When Mr. Edwards finally strode into the room, he immediately started into his opening remarks, thanking his audience for being patient, assuring them he was working hard, updating them on his wife’s health, telling them he wanted to hear their questions and warning them “we might be the first generation of Americans that doesn’t leave our children a better life than we had.”

It took 45 seconds.
Lagging in national polls less than two months before the Iowa caucus, Mr. Edwards is a man racing against the clock, hammering out miles over long stretches of countryside in a campaign that his spokesman, Mark Kornblau, says is dictated by a “flat-out, hard-charging schedule.”

With his campaign sustained by public financing, Mr. Edwards has only recently bought television time for advertising, and so has been racing from one gathering of potential voters to the next.

On relentless tours in Iowa, New Hampshire and other states, the campaign is banking on Mr. Edwards to win over voters and caucusgoers in person, giving the campaign a focus that has sharpened in recent weeks as he tries to convince them he is the best choice for the Democratic presidential nomination.

Like Senator Barack Obama of Illinois, he has stepped up his criticisms of Senator Hillary Rodham Clinton, who has gained in state polls. There is urgency even in his news releases, which remind readers of the number of trips he has already made, or of the time remaining in the countdown to the caucuses.

“With 53 days to go, Edwards will outline what is at stake in this election and call on all Americans to meet the moral test of this generation,” a spokesman, Eric Schultz, wrote on a recent schedule announcement.

Mr. Edwards and his staff members are exceeding his rivals in terrain and time, having rolled through all 99 counties and spent nearly 60 days in Iowa alone since late December, when he announced his candidacy. He has hit towns so off the beaten path that a Des Moines Register columnist, David Yepsen, called them places “where Democrats are ordinarily found only on endangered species lists.”

But it is not just the miles that have been hard fought. In his speeches, Mr. Edwards is equally intense, bluntly asking people to caucus for him and laying bare details of his life, like the recurrence of his wife’s cancer, that prompt forays into deeply personal territory.

Some of his listeners have taken notice. In Dover, N.H., Diane Carson, 58, said she asked Mr. Edwards a question about cancer, which had killed her husband, because she felt “simpatico” with him.

“One other thing absolutely blew my socks off,” Mrs. Carson said. “He locked his eyes on my eyes. He never looked away. In the end he had to go on to his agenda, and he did his thing. But he never stopped looking directly into my eyes.”

“And I have seen a lot of these guys,” Mrs. Carson continued. “I have never experienced that before.”

Mr. Edwards, a former senator from North Carolina and trial lawyer, simultaneously cedes and retains control, like in question and answer sessions when he tells his listeners what he hopes they will ask him.

But unlike the relative discipline of the courtroom, town-hall-style meetings, sometimes held in public squares and barns, are unpredictable. In some instances, Mr. Edwards has been briefly derailed from his message to compete for attention with noisy motorcycles or when eyes have drifted to a friendly farm dog.

At a farm in Cylinder, Iowa, last month, when latecomers unfolded chairs, he paused from remarks about Iran. “Are you going to keep rattling chairs while I am talking?” he said, not in an unfriendly way. Later, he had to be reminded by them what he had been talking about.

Mr. Edwards often says there is much at stake in this campaign, and his pace and rhetoric reflect his perceived urgency. He has sharpened his criticisms of Mrs. Clinton so much that Gordon Fischer, chairman of the Iowa Democratic Party when Mr. Edwards campaigned in 2004, said his demeanor was “much more of an attack dog” than before.

“It really made me question his authenticity as a person and as a candidate,” said Mr. Fischer, who is supporting Mr. Obama. “I wasn’t sure which John Edwards was the real John Edwards. Was it the Southern moderate of 2004 or the full-throated liberal of 2008?”
On the day of the recreation center event, Mr. Edwards rose early to run on a treadmill at a Mason City hotel, and then went on to Charles City, Waverly, Cedar Falls, Mount Vernon and Williamsburg — a circuit of more than 200 miles.

When the convoy reached the recreation center, Mr. Edwards spoke about his Social Security plan, corruption, trade and other issues. At the end he grew more direct, fulfilling the strategy, at this stage of his campaign, of forcefully enlisting the audience’s participation.

“On behalf of our country, and for that matter for the rest of the world, at this point America is counting on you,” he said, looking around the room. “You judge me up or down. And you judge every other candidate by that same test.”

Posted by Howard Martin at 7:13 AM