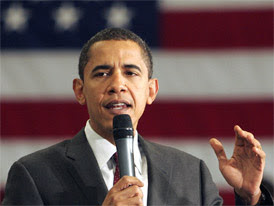 DES MOINES — Sen. Barack Obama (D-Ill.) cast himself Sunday as a natural and necessary heir to the civil rights greats, appealing to black worshippers to show the courage of their forerunners and back his candidacy for president.

In an unannounced appearance that startled most in the African-American congregation, Obama cast his campaign in historic and even divine terms.
He said that, like Moses, the civil rights pioneers had been to the mountaintop but did not reach the promised land, leaving it to today’s generation to finish the job, much as Joshua succeeded Moses.

“We have inherited this opportunity from the Moses generation ... who have teed it up for us,” he said.

It was one of the most compelling rationales Obama has articulated for a campaign that has been sidetracked by missteps and mudslinging but that now sees the possibility of upsetting Sen. Hillary Rodham Clinton (D-N.Y.) in the make-or-break Iowa caucuses on Jan. 3.

Clinton worshipped nearby at Grace United Methodist Church. She did not speak. But so much press tagged along that it looked like a campaign stop, with camcorders on tripods overlooking the pews from a balcony.

Obama had perfect pitch for his appearance at Union Missionary Baptist Church, from his assertion that he was there mainly to worship, to his opening salute to the pastor of 40 years, to his rising, rhythmic, repetitive intonation: “It won’t be easy.”

“When I hear folks in our community say, ‘Yeah, I like Obama — he can talk good, but I don’t think folks are ready for him,’ I say: Be strong, and have courage, because God is walking with us,” Obama said amid rising cheers and applause.

“When they’re saying, ‘I’m worried about Barack’s safety — I don’t know whether you’ll be all right,’ I say: First of all, I got Secret Service — they’re good. But I also say: Be strong, and have courage, because God is walking with us, every step of the way.”

Obama said society’s disparities “between black and white remain as large as ever,” creating an atmosphere where “you are seeing people pay attention in this election in a way they haven’t paid attention in a long time.”

“I don’t want to get too political here, but obviously, they’re not real pleased about what George Bush has done,” Obama said. “We were promised compassionate conservatism but got Katrina and wiretaps instead. We were promised a uniter, and we got a president who couldn’t even lead the half of the country that voted for him.”

At the Methodist church, Clinton sat in the fourth row, donning eyeglasses at one point and bobbing her head as the choir sang.

The congregation was celebrating the Children's Sabbath, which drew another nod from the candidate.

Clinton is Methodist and one of her key supporters, Bonnie J. Campbell, a former Iowa attorney general, belongs to the church.
Beforehand, Clinton stood in the lobby and greeted members of the congregation as they gathered around her and snapped pictures.