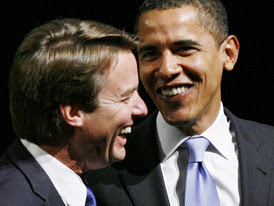 They switched on the lights in the bar at the Hotel Fort Des Moines at 2:00 a.m. Sunday, and a crowd of two dozen buoyant young field organizers for Sen. Barack Obama (D-Ill.) spilled out onto the sidewalk, some jostling past Hillary Clinton's campaign chairman, Terry McAuliffe, who had paused for a moment just inside the hotel's glass doors.
The organizers were men and women in their 20s, and all dressed identically: jeans and red T-shirts with Obama's logo and his call to arms, "Fire it up."

When a man on the edge of the group yelled the slogan, they answered with the response they'd been chanting all night: "Ready to go."

"Fire it up!" the rumpled, older man yelled again.

"Let's kick her ass," the cheerleader finally called out, and the crowd roared.

Trippi had been the subject all week of paranoid rumors on liberal blogs that he was a kind of political double agent, an "Obama plant" in the Edwards fold.

There is no evidence of that, but his mischievous role outside the hotel did reveal what has emerged as a central dynamic of the frantic battle to knock Hillary Clinton off her perch in Iowa:

The Obama and Edwards campaigns have come to view each other — warily on Obama's side, more warmly on Edwards' — as arms-length allies against her.

Asked whether they were teaming up on Clinton, the campaigns' spokesmen offered blunt denials.

"Sen. Obama has a singular goal in this race — to win the Democratic nomination so we can get to the work of transforming this nation," said Obama spokesman Bill Burton.

"No, John Edwards is fighting to win the White House so he can get this government working for regular people again," said Edwards spokesman Mark Kornblau.

The shared tactical goals of the Edwards and Obama campaign fall far short, at the moment, of the true coordination between Sen. John F. Kerry and Rep. Dick Gephardt in 2004, when — former staffers of both campaigns say — aides to the campaigns secretly coordinated their attacks on the insurgent Howard Dean.

There's no evidence of actual behind-the-scenes links between the Obama and Edwards campaigns, and while their attacks on Clinton reinforce one another, they also fly from differing, and sometimes contradictory, perspectives.

Still, at Saturday night's Jefferson Jackson dinner, their messages seemed to echo one another.

Obama criticized Clinton for her alleged divisiveness and lack of principle, Edwards for her ties to a "corrupt" establishment.

And both dismissed the notion of the Clinton 1990s as a Democratic Golden Age, with Edwards fitting that period into his narrative of corporate control, and Obama recalling its polarization.

More broadly, both seek to cast Clinton as a symbol of the status quo, as they offer voters two different visions of change.

(It's an argument Clinton sharply contests, and that she's hoping voters will reject: "There are some who will say they don't know where I stand," she said dismissively Saturday night, adding: "I stand where I have stood for 35 years — I stand with you and with your children and with every American who needs a fighter in their corner for a better life.")

There remain sharp differences between the two challengers.

Obama, who seeks to portray himself as alone in a head-to-head contest with Clinton, has jabbed occasionally at Edwards' support for the war and what Obama's advisors consider to be Edwards' leftward shift from a relatively moderate record in the United States Senate.

"John wasn't this raging populist four years ago," Obama told The Washington Post, adding a more personal shot at his rival's career as "a trial lawyer making millions of dollars."

Tellingly, though, both campaigns moved quickly to paper over the rift that emerged from Obama's Post interview late in the week.

Edwards responded with his comments about how much the two have in common. Asked again on Sunday, he defended Obama, saying he'd been asked a misleading question.

Obama's communications director, Robert Gibbs, refused to respond in any way to questions about how or if the two men are aligned.

"Just not something we're interested in commenting on," he e-mailed.

But Trippi, for his part, an hour after his performance in front of staffers for all three campaigns and several reporters, urged perhaps a bit too much that this reporter not write about the scene, virtually guaranteeing it would see print.

But Trippi's cheer came just hours after the Jefferson Jackson dinner, and seemed to echo its conclusion.
As the event ended, the six candidates took the stage to an upbeat Bon Jovi tune.

Edwards and Obama shook hands, embraced and talked while, on the very edge of the stage, Clinton stood for a moment alone, clapping her hands to the music.

Posted by Howard Martin at 5:08 AM