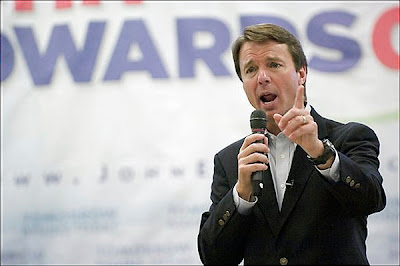 RENO, Nev. -- Democratic presidential candidate John Edwards criticized Sen. Hillary Rodham Clinton over her unwillingness to set a timetable for withdrawing U.S. troops from Iraq, saying her position is tantamount to "continuing the war."
Speaking to reporters after a town hall meeting Sunday in Reno, Edwards contrasted his Iraq views with Clinton's and said the Democratic front-runner owes it to voters to provide specific plans on how to end the war.

Edwards said his plan calls for the immediate withdrawal of as many as 50,000 troops and the full withdrawal of all troops within 10 months. He also said he would prohibit permanent U.S. military bases in Iraq.

At a town hall meeting Friday in nearby Fernley, Clinton said she would withdraw troops "as soon as I can" if President Bush fails to do so. Campaign aides called her a war opponent but said she has offered no timetable for a troop withdrawal.

"She says that she will end the war, but she also says she will continue combat missions in Iraq and keep combat troops stationed in Iraq," Edwards said. "From my perspective, that's not ending the war. That's continuing the war. In fact, it's continuing the occupation. So we have really different views about that."

In a news release issued before the town hall meeting, Edwards said, "On such an important question we need honesty and answers, not double-talk and evasions."

"This is a bogus attack from a candidate who is angry that his own campaign hasn't taken off," Grey said. "The fact is that Sen. Edwards and Sen. Clinton have both said they'd use U.S. forces to go after al-Qaida in Iraq. So it's unfortunate that Sen. Edwards keeps making this phony charge when he's out campaigning."

Edwards, who's locked in a tight race in Iowa with Clinton and Sen. Barack Obama, also criticized Clinton over her response to an Edwards' television ad concerning health care.

In the ad, the former North Carolina senator promises to use his power as president to take away health care benefits from members of Congress unless they pass universal health care by July 2009.

The Clinton campaign branded the threat as "unconstitutional gimmickry" and said the president doesn't have the power to take health care away from Congress unilaterally.

"To me, this is exactly the kind of response you'd expect from a Washington insider," Edwards said. "(It's) circling the wagons, looking out for politicians inside of Washington instead of shaking up the place and doing what's necessary to get universal health care passed. This is another example of the clear choices our country has in this election."
Still, Edwards said all the Democratic candidates offer a clear choice to voters. He called the Republican candidates "George Bush on steroids. They want to keep the war in Iraq going and we want to end the war."

Edwards is running a distant third in Nevada, according to a CNN poll conducted Nov. 9-13 in which Clinton had 51 percent, Obama 23 percent and Edwards 11 percent.

Posted by Howard Martin at 9:50 PM