Andrew Sullivan on Teddy: "Tainted, flawed and the maker of a president" 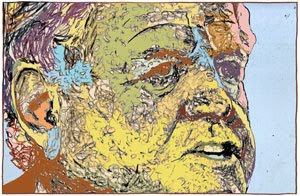 IF THE Kennedy funeral looked a little like a royal one, we should not have been surprised. Three living former presidents attended the rites. The tributes have been pouring in across the political spectrum. Orrin Hatch, the arch-conservative Utah senator, even composed a little song and sang it on YouTube. Among the memorably awful lyrics: “Just honour him/ Honour him/ And every fear/ Will be a thing of the past.”
The iconography of Kennedy’s passing was laden with memories of the Kennedy past: the death in the famous compound at Hyannisport, the family mass in the little room that overlooks Nantucket Sound, the tour through Boston (across the Rose Fitzgerald Kennedy Greenway), the burial at Arlington next to his two brothers. It felt like a national day of mourning, rather than a 77-year-old pol’s passing.

This is unusual because Edward Kennedy dies not a martyr as Bobby and Jack did, nor as a war hero, like his oldest brother. He died a mere senator, whose career was so long, as George Will noted, that it comprised more than one-fifth of the entire existence of the US constitution.

It is, perhaps, a young country and it holds tight to its legendary families, even in less than glamorous hands. Kennedy, after all, was a failed presidential candidate, a philanderer and drunk, and his most cherished legislative goal – health insurance for all Americans – remained elusive to his dying days (if closer than ever before).

His passionate left-liberalism (far more orthodox than his brothers’) endured through the conservative era of the last quarter century to the fluid ideological wreckage of today.

But he never rose past the position of majority whip, a post he held for only two years, in part because he was also clearly complicit in the death of Mary Jo Kopechne, a woman he left dying in a car he crashed, and whose fate he first ducked rather than reported.

And his memorably vicious attack on Ronald Reagan’s nomination of Robert Bork to the Supreme Court remains as much in the minds of Republicans as his stirring 1980 “The dream shall never die” speech at the Democratic convention resonates with Democrats. This is a mixed legacy, if a thoroughly human one.

So why all the fuss? The answer, of course, is dynasty, one of democratic America’s greatest and most endearing self-contradictions. The country that began by throwing off a monarchy more than two centuries ago immediately plunged into a democratic form of dynasticism. The Adams family produced two presidents in short order and, later, the Roosevelts and Bushes managed two as well.

But the Kennedy dynasty was the first in the modern era to combine tradition with glamour. Dynasties summon up images of fusty old clans with large rural estates, servants and coats of arms. That’s certainly how the sprawling Roosevelt clan appeared and how the Bush clan, summering in Kennebunkport under the auspices of a matriarch just as stern as Rose, still come off.

The Kennedys were different. They gave the world a dashing, witty, young president, a charismatic, assassinated attorney-general, the breathless stylishness of Jackie and the vistas of Hyannisport in the summer and children playing under the desk in the Oval Office. If this was a kind of dynasty, it was more in line with Diana Spencer than with Charles Windsor. It was a dynasty forged as much in Hollywood as in the politics of Boston. And when Hollywood dynasty is linked to actual power, its electoral aphrodisiac intensifies.

This is what the Kennedys meant and what this weekend of mourning really pays tribute to. They were and are a deeply flawed triumvirate – Jack, Bobby and Ted – but they managed to harness a sense of history with destiny, wrapped up in a robust liberalism.

Viewed dispassionately, of course, the Kennedy presidency is not exactly a triumph. It began with the disaster of the Bay of Pigs and careened through the Cuban missile crisis, beset all the while with staggering private misbehaviour in the White House, ties to mafia thugs and an ongoing war of nerves with J Edgar Hoover. Bobby Kennedy began his public career as a pursuer of communists in the government and ended it in that remarkable moral transformation of the 1968 campaign.

Ted Kennedy got his Senate seat after a Kennedy stooge kept it warm for him for a few months (until he was old enough), and lived through Chappaquiddick, a broken, alcoholic marriage and the deaths of two nephews.

And yet the Kennedys’ wit and rhetoric and intelligence and obvious passion – seen through the retroactive prism of tragedy – came to the surface and never really disappeared. They managed that great patrician feat – of seeming to be in touch with the common man because of their privilege, rather than despite it.

Ted pushed the boundaries of this. He offended the white working classes of Boston by his support for bussing African-American schoolchildren into white neighbourhoods.

His old nemesis, The Boston Herald’s Howie Carr, put the point well last week: “Whether it was court-ordered bussing in Boston in the 1970s, or the affirmative-action policies that stymied the careers of so many of his family’s traditional voters, Kennedy never grasped the depth of the blue-collar frustration as he veered left. What infuriated them even more was that so many of them had grown up in homes where on one side of the mantel was a faded photo of the martyred JFK, and on the other, the Pope, with a dried-up Palm Sunday frond between them.”

Yes, that sounds familiar. But, no, it wasn’t the whole truth. The Irish and Italian Catholics of Boston felt much closer to Ted than to many others more conservative than he – their former governor, Mitt Romney, for example, or their current one, Deval Patrick. Kennedy’s travails with the bottle and the boobs won them over; his tragedies brought people closer to him; and his long arduous career proved his mettle.

For Ted achieved what neither Bobby nor Jack did: he worked in the legislative branch tirelessly over a long period of time, doing the dull stuff of politics that changes lives.

His office was legendary for its constituent outreach. You can’t go far on Cape Cod, for example, without bumping into one of his projects. A call from Kennedy’s office had more frisson than anyone else’s and more clout.

He also worked across the aisle, helping George W Bush to pass his No Child Left Behind Act to improve school standards, joining with John McCain to forge a humane immigration reform.

He was a senator able to be fiercely ideological and also fiercely pragmatic, able to develop friendships beyond politics – friendships that are the grease that makes the Senate work. He was a master of parliamentary procedures and the helm of a ship of highly skilled staffers.

He was also, of course, a politician. Despite being a proponent of green energy, he single-handedly prevented the construction of a wind farm off Cape Cod because it might obstruct his sea view. In 2004 he fought hard to remove Romney’s right to appoint a temporary senator if John Kerry were to win the presidency. And yet in the week before his death he urged a return to the appointment of a temporary senator – in order to keep a Democratic vote for healthcare reform intact. He could be partisan and hypocritical, as well as bipartisan and principled.

He was also, I can personally attest, the de facto father of the orphaned children of Jack and Bobby. This was no easy role. One of my oldest friends is one of Bobby Kennedy’s sons, Max.

I saw in Max’s life, in his own successful battle against addiction, the guiding hand of his Uncle Teddy.

Ted couldn’t rescue all of them – David Kennedy, Max’s brother, died of a drug overdose. But he understood the disease of alcoholism that coursed through the family, sensed the danger of fatherlessness among his nieces and nephews and his own struggles against addiction fortified the others. And at every tragedy – Michael’s death while skiing, David’s in a lonely hotel room, John F Kennedy Jr’s plane crash – Ted was the rampart of the clan. He was a father figure in many ways.

His final son was Barack Obama. Kennedy’s endorsement of Obama early in the campaign, his virtual anointing of him with the Kennedy mantle, was a pivotal point in the defeat of that other burgeoning dynasty, the Clintons. Obama was moved to tears by the gesture and he isn’t moved too often. And he was touched in part because of the liberalism that Kennedy unfashionably held to: a firm belief that government must be at hand to help the poor, the marginalised or the needy.

Kennedy’s insistence on what he saw as racial justice and his deepest passion, universal healthcare, framed his legacy. There wasn’t a gay rights bill this compulsive heterosexual didn’t champion. Even if you disagreed with him on some issues, as I did, there was nothing subtle or contrived about his liberalism.

It was a big-hearted sort of politics, an expansively righteous sense of duty and, as such, an integral part of what makes Anglo-American politics work. Conservatism needs a Reagan and Thatcher; liberalism needs its Kennedys. Because we all need myth and we all need royalty – even if it is strained through the sieve of democratic rule.

Enoch Powell once remarked that all political careers end in failure. The strange thing about Kennedy is that his own might end posthumously in success. His anointed son Obama and a Democratic Congress will almost certainly pass a bill this autumn that will expand access to healthcare to all Americans. He fought for this for 40 years; and despite extreme resistance, peaking now, it seems clear that the Democrats have the votes to pass universal insurance, paid by government subsidy, for private healthcare.

It will cost $1 trillion (£614 billion) over the next decade, less than the Iraq war, if more than the United States can afford right now. But the passing of Kennedy will doubtless stiffen liberal spines to see it through.

Republicans believe they are doing to Obama what they did to Bill Clinton in 1993 and 1994. But Obama won a clear majority while Clinton got only 43% of the vote; and this time, business needs reform because of soaring costs as much as the needy; and the insurance and drug companies are eager for all those new clients.

Clinton, moreover, failed to get his bill, rendering him bloodied; Obama will not fail to get his. There is a poignancy in this, whatever you think of the details of the bill. And Kennedy’s passing is a clarion call to finish the dream he worked for for so long.

As The New York Times elegantly put it, Kennedy “was a celebrity, sometimes a self-parody, a hearty friend, an implacable foe, a man of large faith and large flaws, a melancholy character who persevered, drank deeply and sang loudly. He was a Kennedy”.

Maybe it’s my Irish blood or my love for some of his family – but even as I recognise that his vision of politics was different from my own, I am glad he lived and lived long.
He was in the end more than a Kennedy. He was a senator. He worked the hard way, in often unglamorous circumstances, mostly in the minority, but he worked.

Some in dynasties rise high and fall far. Others provide the drop-shadow of their siblings’ drama: the prosaic work of legislating that endures even after the dream has died.