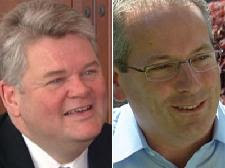 Seattle Mayor Greg Nickels is losing ground in his bid for a third term, according to a new KING 5 News poll.
With 12 days until votes in the primary election are counted, the poll of 579 likely Seattle voters found that 22 percent would vote for Nickels. That’s down four points from an identical poll released three weeks ago. His lead on the competition has shrunk from 12 percent in the last poll to just 3 percent today.

T-Mobile executive Joe Mallahan, who just began running ads on TV, has 19 percent of the vote, up from just 8 percent three weeks ago.

"I'm delighted people are now paying attention. And as they learn about me, they seem to be excited about supporting me,” said Mallahan.

Among voters 65 and older, Mallahan leads Nickels by a nearly 2-to-1 margin. Among independents and Republicans, Mallahan leads by 7 and 6 points respectively. Nickels leads by 10 percent among Democrats.

Community organizer Mike McGinn is keeping the race interesting with 15 percent of the vote. McGinn says it’s because of his consistent anti-Alaskan Way Viaduct tunnel message.

“We've had volunteers for two months now calling primary voters and telling them where we stand on the issues,” said McGinn.

Only the top two vote-getters on Aug. 18 move to the November general election. The new numbers have some speculating that, after eight years in office, Nickels may not make it past the primary. Others disagree, but do say that the current numbers do not bode well for the incumbent.

“You've got 75 percent of the voters questioning whether they're going to vote for him. He should be worried about that and step up his campaign,” said Matt Barreto, a political science professor at the University of Washington.

Despite the numbers, the Nickels team appears to be determined to stay the course.

“We're gonna keep doing what we've been doing and that's go out and talk to the voters and talk to them about his record,” said Sandeep Kamshik, Nickels’ campaign spokesman.

Here’s how the other candidates are faring:

Posted by Howard Martin at 6:50 PM