Woodstock: "You Had To Be There" (why I didn't want to go) 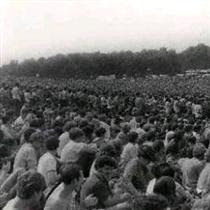 Going to Woodstock was interesting. Getting out of there was ecstasy.

Four of us set out on the morning of Friday. August 16. 1969--me, fresh out of the Navy; my college friend Phil; and our girlfriends, Karen and Mary. We had spent Thursday night at my sister's farm in Rockland County, not too far from where the festival was to be held.

She and her husband wanted to come with us, but they had a small child and decided to stay home. They waved goodbye to us from their porch as we pulled out in Phil's beat-up Volkswagen bug. We knew we were in for an adventure of some sort.

Why did we go? Partly for the scene, which promised to be out of the ordinary. Partly for the music: it wasn't every day you could see and hear on the same program The Who, Jimi Hendrix, the Grateful Dead, and the many others whose appearances had been advertised. But mainly, we went because of the persistent rumor that Bob Dylan might show up. Dylan supposedly lived in or near Woodstock, an artsy sylvan village. It was on account of Dylan's glamour that the promoters tried to mount the festival in Woodstock, and then keep the name even after the site had to be changed. The fact that there had been no official announcement proved nothing. The mystery tramp wasn't into official announcements. I'm still convinced that two or three hundred thousand of the half million or so people who eventually showed up were drawn by the mere possibility he might sing. Twenty years later, when every beer-sponsored summerfest seems to have Dylan on its schedule, this may seem incomprehensible. But in 1969 the reclusive young composer of "The Times They Are A-Changing," "Blowing In The Wind," "Like a Rolling Stone," etc., was for millions of his fellow citizens the most charismatic creature on earth. His prestige was somewhere between Byron's and Jesus Christ's. So off we went.

The festival began on the New York State Thruway, where every other car was packed with happy, long-haired kids flashing peace signs. On the country roads leading to the site the atmosphere was of a vast medieval gypsy pilgrimage. Besides our tickets, we had low-grade press credentials--not good enough to get us backstage, but OK for getting us into some sort of special parking area. I was representing Win, a tiny anarcho-pacifist biweekly. My friend Phil was representing National Review, for which he would write an article about Woodstock arguing that rock 'n' roll exemplified conservative values in action. Somewhere, perhaps, an impressionable Lee Atwater took note.

We kept driving--slowly, because of the traffic and because by now the running boards and bumpers of the VW were piled high with people catching a ride. We came over the crest of a hill and there, sloping down before us and to our right, was a huge natural amphitheater covered with the biggest crowd any of us had ever seen. We inched down practically to the stage, abandoned the car, made our way to a sport halfway up the hill, sat down, and waited.

We were well-prepared, we thought. We had new sleeping bags and air mattresses, changes of clothes, dozens of sandwiches, jugs of wine and water. The music started--Richie Havens singing "Handsome Johnny," a stirring anti-war anthem, good and loud. The sun shone. The crowd got bigger and bigger.We ate sandwiches and shared some with our neighbors. Everyone was feeling great. Then it rained. Everyone got wet. The music stopped, to forestall the possibility of electrocution. The rain stopped (but everybody stayed wet). It got dark. The music started again--Ravi Shankar. It rained again.

And so on, all night long.

I vividly remember, sometime in the wee hours, Joan Baez's tiny figure spotlighted in the darkness, her pure voice singing a cappella, the crowd calm and still. But most of the time, it wasn't that much fun. Any excursion was a major production. It took an hour to pick one's way through the crowd to the Port-O-Sans and wait in line. It could take another hour to get back, during which, with mounting anxiety, one would become convinced that one's friends were forever lost in the darkness.

Our sleeping bags and clothes got hopelessly soaked and muddied. Our spot was right next to a sort of aisle--a thick, slippery, brown river of boots and muck. As we lay there, trying to sleep, a constant, never-ending stream of people moved back and forth. All night long, without cease, their feet sloshed and stomped and slammed a few inched from our heads. Some of these passer-by were chemically disoriented. Their panic and confusion made them heedless of their steps. The rain, the mud, the unending shuffling and tramping, the constant fear of having one's face trodden on--all this made sleep difficult.

We tried going to the car in shifts to get out of the rain, but with the windows closed it was impossibly damp and stifling inside. Saturday afternoon the weather seemed to clear up. We put on our last dry clothes and began to feel tentatively cheerful. Then it rained again, torrentially. Then the key to the trunk broke in the lock, cutting us off from all our remaining supplies. But the ignition key still worked. As the engine coughed and rattled, we looked at each other, nodded, and got in.

We drove slowly through a Matthew Brady phantasmagoria of tents and mud. Tens of thousands of people were fleeing Woodstock. So many of them climbed onto our VW that there was an ominous crack. The car still moved but couldn't take the extra weight. So two of us trotted along like Secret Service agents, asking would-be riders not to pile on. Everyone was polite and friendly, just as the legend has it.

We spent the rest of the weekend snug and dry at my sister's place, watching reports from the scene on TV. One nagging worry was that Dylan would show up after all and we'd have to spend the rest of our lives wishing we hadn't left. When that didn't happen our contentment was complete.

So there you have it. That's what Woodstock was "like."

Howie P.S.: In this case, the media version was better than the real thing. This may also apply to some other times, "back in the day."
Posted by Howard Martin at 2:23 AM

Email ThisBlogThis!Share to TwitterShare to FacebookShare to Pinterest
Labels: woodstock