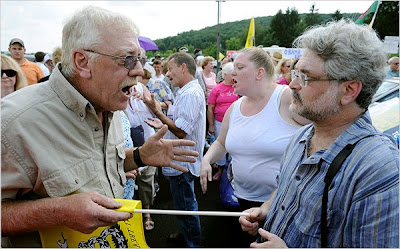 Questions for Tom Daschle, "The Selling of the Policy" (Deborah Solomon):

As a former Democratic senator from South Dakota who wrote a best-selling book on health care, “Critical,” and was a shoo-in for the position of secretary of health and human services until unpaid taxes became an issue, do you get the sense that the Republicans have dropped out of the health care debate?
That is the sense I’m getting. I’m incredibly disappointed. Several years ago I worked with George Mitchell and Bob Dole and Howard Baker to create a bipartisan policy center. I was very optimistic last spring when we issued our proposal that this could be bipartisan, but clearly that’s not the way it’s trending.

Do you think President Obama has done a good job of selling health care reform to the general public?
I think we have to do better at making this issue a moral imperative. I don’t think we’ve succeeded at that yet. I think the more we can bring everybody to an understanding about how this in many respects is the civil rights battle of the early part of this century — it’s a fight for the disabled, it’s a fight for the sick, it’s a fight for equal rights when it comes to health.

With all of his eloquence, why can’t the president convey that message?
I think in part because the organizational strength of the other side has once again surfaced. The other side has socialism, they have fear of government, they have rationing and all these — Scare phrases. The Democrats need better phrases. We do.

What about Better Care? Medicare to Better Care?
We’ve got to boil it down to those themes that really motivate and have emotional value.

What are you doing now?
In my life generally? I work with my wonderful law firm, Alston & Bird.

You’re not a lawyer, are you?
Exactly, no, I’m not. If I have one regret in life, and I don’t have many, it’s that I didn’t get advanced degrees when I was younger.

You don’t need a law degree; you make your own laws.
I do that, and then I advise clients.

It has been reported that you’re a paid adviser to the insurance giant UnitedHealth Group, which opposes your belief that health care reform needs to have a public option. Why do you work with them?
On the left there are those who say that you should never talk to people who differ with you on a high-profile issue. My question to the left would be, whom would they advise these insurance companies talk to? Rush Limbaugh and Glenn Beck and Sarah Palin? That’s the alternative. They can talk to Glenn Beck and Sarah Palin, or they can talk to me.

It has been reported that your salary from Alston & Bird last year was $2 million.
I don’t know where that came from. I wish it were $2 million.

Why do you wear red glasses?
When I left the Senate, I felt more liberated to do things that I felt were fun to do.

In February, after you confessed to owing $140,000 in back taxes, you withdrew your nomination for a position in the Obama cabinet, as secretary of health and human services. Did the president push you out?
Oh, no. I have to say I was very pleased and grateful for the support that I got from the president on down. He called me a couple of times that day. He said, think about it and then I will accept whatever decision. Then he called me back later after I indicated that it was my final decision, and he just was calling to see how I was doing.

And how were you doing?
It was a difficult time. I can’t deny that. My whole family left work that day or just chose not to go in and they all came over to the house.

What helped you get through that period?
I’ve got this slogan that my family — they grimace when they hear me say it because I say it too often. But I believe that the windshield is bigger than the rearview mirror.

For all the shouting that has dominated these town hall meetings on health care lately, they have yielded a few important insights. The first is that the town hall itself has probably reached the end of its usefulness in the Internet age; if you’re looking for thoughtful dialogue, you might as well hold your next meeting on the stern of a Somali pirate ship. The second is that we now have a visual sense of the kind of voter who is militantly opposed to Obama’s health care agenda and, more broadly, to the president himself.
The typical anti-Obama activist tends to be white, male and — perhaps most significant — advanced in age. A poll conducted earlier this month by CNN and Opinion Research showed a rather stark age divide when it came to health care: 57 percent of voters under 50 said they favored the outlines of a Democratic plan, but that number was a full 20 points lower among voters over 65. In three Pew Research Center polls going back to April, senior citizens consistently gave Obama’s job performance lower approval ratings than did than any other age group.

Ideologically speaking, this is not what we are accustomed to seeing. Successful Democratic candidates have long relied on oldsters who grew up worshiping Franklin Roosevelt and who cherished their Medicare and Social Security; one of the best-worn Democratic clichés over the years has been the cry that Republicans were plotting to strip seniors of their pills and pensions. If that advantage is eroding now, then it certainly has something to do with the specifics of the health care argument. Suddenly it’s the Democrats in Washington who are talking about rejiggering Medicare to rein in costs, and now Republicans are the ones expertly exploiting fear among the elderly.

And yet Obama’s problems with the aged didn’t start last month. He struggled to connect with seniors in last year’s Democratic primaries, and though a Pew poll conducted several months before the general election gave Democrats a 12-point partisan advantage among seniors, Obama himself never really won them over. He performed about 8 points lower among the oldest voters than he did among the electorate as a whole; by contrast, the last successful Democrat, Bill Clinton, twice ran the same or better among seniors as he did overall.

Most of the conjecture about this phenomenon during the campaign centered on race, the theory being that a lot of voters born into segregated America simply had a harder time embracing the idea of a black president. No doubt there’s some truth to this. (Perhaps that’s the audience Glenn Beck of Fox News had in mind when he posited recently that Obama loathed all white people, which would have come as a surprise to the president’s white grandparents.) But it’s also impossible to extricate race from your standard generational resistance — to know, in other words, whether some seniors opposed Obama because he was black or because he seemed to embody, with his fist bumps and his failure to cover his heart during the national anthem, the further decline of some Rockwellian cultural ideal. Every young presidential aspirant whose candidacy, like Obama’s, seems largely rooted in generational unrest — John Kennedy in 1960, Gary Hart in 1984 — irritates traditionalists, regardless of ideology or ethnicity. It must be hard for older voters not to experience such transitional campaigns, with their implicit indictments of the past, as a rhetorical hand on the back, pushing them not so gently toward the inevitable exit.

More to the point, though, it’s probably time for us to update our notions of elderly Americans and how their worldviews were formed. We are inclined to imagine our oldest citizens as products of the New Deal, voters whose earliest memories engendered a lasting faith in the goodness of government. But conservative theorists like Karl Rove used to say that time was on the side of Republicans where the elderly were concerned, because Depression-era memories would someday give way to a more complicated historical legacy — and perhaps, in this narrow respect, their grand predictions had some validity. If Obama has little of Bill Clinton’s appeal to old folks, it’s probably because old folks now aren’t the same ones who rode volunteer-driven vans to the polls in 1992.

After all, a 70-year-old American today, born in 1939, probably has no personal memory of F.D.R., but he would have lived through the pain of disappearing manufacturing jobs and family farms, and the rapid deterioration of urban neighborhoods and schools, conditions unabated by government experiments in welfare and public housing. Wooed by Ronald Reagan during their prime earning years, these voters may not be nearly as sympathetic to Obama’s vision of activist government as Democrats might have assumed. For these new senior citizens, even the Social Security and Medicare on which they often rely may be viewed less as instruments of beneficent government than as a partial repayment for decades of taxes.

The good news for Obama and his party, of course, is that they still enjoy an enviable level of support among voters just breaking into the work force and among those now drifting into middle age. And that means that if reigning Democrats can manage to get health care policy right this time, and maybe even add some fundamental energy reforms, they might still be able to cement more hopeful attitudes about government for generations to come, much as Roosevelt did in his day. Today’s younger voters might never be as party-affiliated as their grandparents were, but neither may they turn out to be as cynical about their leaders as their parents often seem to be. If the president has his way (which is to say, if the worst nightmares of Republicans come to pass), those voters may someday live out their retirements in Arizona or Nevada, spinning stories for their grandchildren of the days when Barack Obama was twice elected president, when government managed once again to make things better instead of worse and when politicians still bothered with these things called town halls.