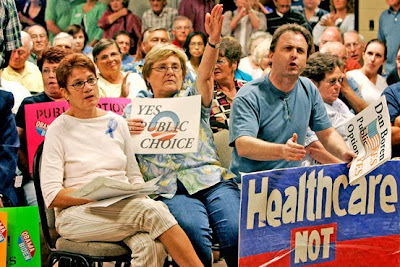 Audience members react to an answer from Democratic Rep. Dan Boren during a town-hall meeting on health care in Muskogee, Okla., on Tuesday. White House officials concede that the anger that has surfaced in town-hall meetings on TV is shifting the debate on the health overhaul.
Jonathan Weisman (Wall Street Journal):

President Barack Obama, trying to regain control of the health-care debate, will likely shift his pitch in September, White House and Democratic officials said, as he faces pressure from supporters to talk more about the moral imperative to provide health insurance to all Americans.
The rethinking comes amid a struggle by the White House to clarify its view on a public insurance plan, which liberals see as a critical part of a health overhaul. Health and Human Services Secretary Kathleen Sebelius said Sunday that a public plan isn't the "essential element" of a health bill, prompting sharp words from liberal groups.

The muddle continued Tuesday, with White House spokesman Robert Gibbs facing repeated questioning at his news briefing on whether the position has changed and how the president will respond to the liberal concerns.

Mr. Gibbs said the president's "preferred method" is the public plan "but he's certainly open to looking at and discussing other ideas." Ms. Sebelius insisted, "We continue to support the public option."

She said her earlier comments on a CNN program got too much coverage. "Sunday must have been a very slow news day because here's the bottom line: Absolutely nothing has changed," Ms. Sebelius told an audience in Washington.

While trying to placate liberals, White House officials also want to beat back broader public unease fed by critics' charges that the Democratic plan would cost too much and lead to excessive government control over family health-care decisions.
More

The president is expected to present a more emotional appeal during a conference call Wednesday with liberal religious groups. A senior White House official said the message would be tailored to the groups' moral emphases, although he cautioned the president's message to religious groups may not herald a broader shift in themes.

"This is such a technical issue, it's easy to get bogged down in the weeds," said Dan Nejfelt, a spokesman for Faith in Public Life, one of the groups scheduled for the Wednesday call. "It's important to have a voice saying, 'This is about right and wrong. This is about honoring faith.'"

The president's revised health-care emphasis is likely to roll out as summer ends, when White House officials believe a broader group of voters will tune into the debate. The new strategy envisions speeches rather than informal town-hall meetings, said a senior official.

The president began his health overhaul this year with talk about cutting health-care costs. In the past few weeks, Mr. Obama has focused his message on what his plan would do for Americans who already have medical insurance. He has said, for example, that his plan would cap out-of-pocket expenses and protect people from losing insurance if they get sick.

A senior Republican Senate aide agreed that Mr. Obama's appeal to the pocketbook of middle-class Americans is likely the best strategy. He said, however, the president has failed to persuade Americans that they have something to gain. At this stage in the legislative process, he said, Americans will balance personal costs with ideals, and, he added, ideals almost always lose.

Mr. Obama has come under criticism from supporters who say the president has been mired in the details of insurance regulation, rather than promoting the lofty themes that got him elected.

A Democratic strategist said, "If you are going to sell something as big and monumental and transformative as health care, you cannot get small with it. You've got to be larger. You've got to call on the better angels out there."

Obama campaign officials ridiculed Hillary Clinton's efforts to line up Washington power brokers behind her. Now, the White House boasts of having interest groups and the health-care industry -- from the AARP to drug makers to health insurers -- in support of health-care changes.

White House officials disagree with much of the criticism, saying a campaign message is different from a legislative push that requires cooperating with interest groups. Democratic officials involved in the White House health-care push said details that can be ducked by a candidate can't be avoided by a president. They say the message on improving health insurance is getting through.

But polling indicates the current White House tack is in trouble. An NBC News poll released Tuesday continues to show 41% supporting the way Mr. Obama is handling health-care reform; 47% disapprove. In April, 33% wanted a complete overhaul of the U.S. health-care system. That is down to 21%. Now, 31% said they want only minor changes, up from 21% in April.

"Everybody's very nervous," a senior Democratic leadership aide in Congress said Tuesday. Members of Congress have been asking for the five words they need to explain the health-care imperative, the equivalent of "It's the economy, stupid," the aide said.
White House officials concede that the anger that has surfaced in town-hall meetings and been broadcast on TV is shifting the debate. William McInturff, a pollster for The Wall Street Journal and NBC News, said most Americans in the political center aren't following the details of the legislation. They hear people yelling and see the president stymied even with a strongly Democratic Congress. Many conclude, he said, that something is wrong with the Obama health-care effort.

Posted by Howard Martin at 5:59 AM