McDermott on health care reform: 'This is war' 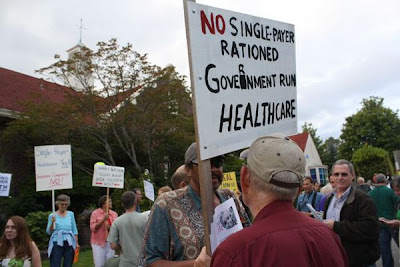 As West Seattle Democrats convened to hear their congressman talk health care, the loudest noise came from the political left - a group of elderly singers called the Raging Grannies.
The appearance of Rep. Jim McDermott Wednesday evening did draw a small group of protesters decrying what they argue is the threat of government health care. "If we went to a single-payer system it would bankrupt the country," said protester Thomas Schafer.

But the greatest number of people turning out at the Hall at Fauntleroy came to demand health care reform and a so-called "public option," in which a government-run program would compete against private insurers.

The blood lust was on the left.

"The insurance industry wants it just the way it is," McDermott said. "Insure the healthy and let the rest of us ...."

"Die!" came cries from the crowd.

Outside the hall, before McDermott spoke and afterward, a free-form debate took place with very much a Seattle character to it.

"Are you a Christian?" Loren Nelson, a critic of President Barack Obama, asked the man with whom he was debating.

"I am a Buddhist," replied Michael Law.

Craig Keller, an Obama critic and Republican, stood on the sidewalk and said: "I want to ask McDermott..."

"You're not going to get in," Schafer told him.

The 34th District Dems eventually adopted a Solomon-like compromise. Critics were allowed into the hall, but Democrats got to question McDermott.

Outside, one elderly leather-lunged protester, ranted at people as "socialists," and kept repeating, "Obama is a liar."

Another protester carried a sign showing America's 44th president as Batman's nemesis, The Joker, but somewhat sheepishly defended the sign on grounds that Democrats once drew a similar likeness of President Bush.

The most martial rhetoric came from McDermott.

"This is war," he declared to cheers. "This is a war over whether Americans can have health security and economic security."

The original call for protest came from Steve Beren, a Republican who has twice run against McDermott. McDermott took 290,000 votes last Nov. to about 57,000 for Beren. "It was very hot in there. I stood against the wall: It was quite a crowd," Beren said afterward.

McDermott is a leader of the House Progressive Caucus, who has twice been to the White House to talk health care with Obama.

Beren is on the outside looking in, but undaunted. He had addressed an open letter to Obama that concludes: "Your socialized medicine plan would restrict our liberty, increase government control over our lives...and contradict some already existing rights."

McDermott pictures another future.
"We ultimately will have a bill, and I think we will have a bill with a strong public option coming out of the House of Representatives," he said.

The 400 people inside applauded and whooped.