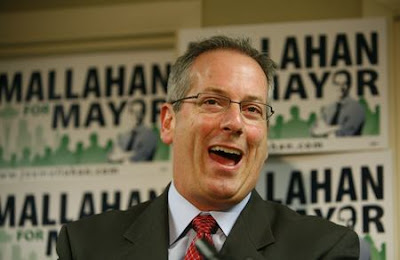 Businessman Joe Mallahan, who will face environmentalist Michael McGinn for Seattle mayor in November, held a brief news conference Friday after incumbent Greg Nickels condeded he had lost the primary election.
"I want to publicly thank Mayor Nickels for his years of service to the City of Seattle. He may have made decisions that we don't agree with, but public service is never easy and he's been a committed public servant," Mallahan said. "I appreciate everything he's done for the city....the mayor called me this morning and offered me his congratulations....I told him I was very, very honored to run with him."

Mallahan answered only a few questions before his campaign staff took him away, saying he had commitments with his family. The Mallahan campaign told reporters he would not be available later, or throughout the weekend.

On Wednesday, McGinn held a news conference at his home after initial primary returns showed him leading (as of Friday afternoon McGinn had retaken the lead, with Mallahan in second). McGinn stayed until all questions had been asked. Shortly after Mallahan's news conference Friday McGinn was on KUOW radio answering listeners' questions. The station said Mallahan had been asked on the program as well, but his campaign said he was unavailable.

Mallahan, the T-Mobile executive, was asked at his news conference how he'd change his campaign now that he's facing McGinn.

"My message is going to remain the same - executive management, open and accountable leadership, safe neighbhorhoods, effective transportation. Clean up Puget Sound. So I'll leave it to Mr. McGinn to differentiate. I'm sticking with the clear message we've laid out to date."

Mallahan reiterated his stance that the tunnel replacement for the Alaskan Way Viaduct must go forward. McGinn has based his campaign on opposition to the $4.2 billion project, saying the $930 million the city would contribute would be better spent elsewhere.

"The worst thing we can do in this economy is slow down the flow of people and good," Mallahan said. "We'll work closely with the state DOT to bring that project in on time."

He reiterated his opposition to the Mercer Street Project, saying it wasn't well financed. He said the $70 million in levy funds committed to the project should go where they were originally intended, to fixing roads and sidewalks.
T-Mobile, Mallahan's company, has been criticized by the labor community for being aggressively anti-union. Asked what he would say to labor, he said: "I value unions...I absolutely support the right of workers to organize and bargain collectively."