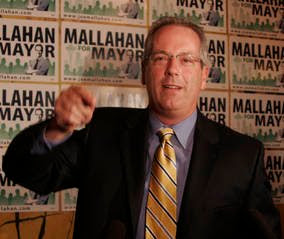 Supporters of Joe Mallahan who gathered in the two backrooms of Fado’s Irish Pub were stunned – yet jubilant – by the early results.
“Oh my God,” shouted one supporter.

“Look at that,” said another, as KING/5 showed Mallahan in second place behind Mike McGinn with 40 percent of the vote in.

The comments turned into cheers and applause as the candidate arrived, at 8:43 p.m.

“Thank you. And wow!” were the first words out of Mallahan’s mouth.

“You’ve got a lot to celebrate. It’s all of you volunteers from work and the school that turned out to work. And, hey, you got it done.”

Mallahan attributed his success to what he called Mayor Greg Nickels’ “slur campaign.”

“Greg’s slur campaign seemed to hurt him more than me,” he declared, as supporters cheered. “Hey, we all knew we needed a change. We had 32 years of Greg’s service, but his way was the old way, and we needed to move away from that.”

He added later in a conversation with reporters that voters with whom he spoke this week had told him they decided to support him because of – not despite – Nickels’ attacks.

“They said: ‘Joe, we know about you. We’ve been thinking about voting for you, and now that Nickels said what he said, we know you’ve got to be good.’ ”

Mallahan also credited his success to the volunteer network he was able to build, modeling the strategy that helped elect Barack Obama president. He acknowledged the help of Obama supporters as well as local Democrats, union members and his own family.

“You all know I come from a family of nine siblings,” he said. “Well, all of them were at my place this week at one point or another making calls, supporting me. There’s always sibling love, but that’s really showing some care.”
If the early results hold, Mallahan and McGinn will face off in the general election, the first Seattle mayoral race in decades that did not feature an incumbent or a clear favorite. McGinn led by a narrow margin over Mallahan and Nickels in results released earlier this evening. More results will be released late tomorrow (Wednesday) afternoon.

Posted by Howard Martin at 3:22 PM