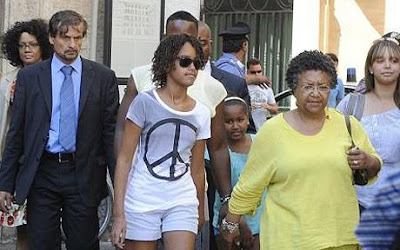 Anti-war protesters are planning an autumn campaign against President Barack Obama's extension of operations in Afghanistan to coincide with the eighth anniversary of the first bombing of the Taliban. ---There is rising disillusion among liberals and peace activists that a president who built his campaign on his opposition to the war in Iraq now views America's other conflict as a "war of necessity".
Mr Obama has already added 21,000 extra troops to the 38,000 stationed there by George W Bush. In the next few weeks, he is likely to receive requests from the Pentagon for more when Gen Stanley McChrystal, the US commander in Afghanisan, submits a report on the progress of the war.

It is expected to paint a grim picture and offer the president three options for action: increase troop numbers dramatically, increase them less dramatically or leave them as they are.

Some organisations that campaigned against the Iraq war are biding their time or are more inclined to side with the president's argument that a stronger counter-insurgency effort in Afghanistan is in US national interests.

But others have run out of patience, and though they know they will not yet fill city centre streets with protestors, they plan to hold marches and smaller events such as forums with war veterans and troops' families, as well as lobbying members of Congress.

"As progressives feel more comfortable protesting against the Obama administration and challenging Democrats as well as Republicans in Congress, then we'll be back on track," Medea Benjamin of the anti-war group Code Pink said.

Perry O'Brien, president of the New York chapter of Iraq Veterans Against the War, said: "In the next year, it will more and more become Obama's war. He'll be held responsible for the bloodshed."

Though public opinion in the US has not turned against the war as sharply as in Britain, for the first time a majority of respondents (51 per cent) in a recent Washington Post-ABC poll said the war was not worth the fight. Among liberals, strong approval of the war plummeted by 20 per cent.
On Friday the Pentagon confirmed that August was the deadliest month for US troops since the start of the war in October 2001 to remove the Taliban government, which had refused to hand over Osama bin Laden after the September 11 attacks.

Posted by Howard Martin at 6:43 AM