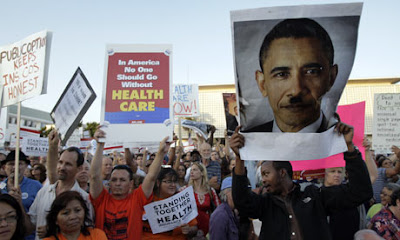 A protester at a healthcare rally in California waves a doctored poster of Barack Obama at a town hall meeting in Alhambra, Calif, Aug 11, 2009. Photograph: Jae C. Hong/AP

As storm over Barack Obama's healthcare reforms rages, surge in rightwing extremism is fanned by opponents---The message was clear. The sign carried by a 51-year-old man last week outside a raucous town hall meeting on healthcare in Hagerstown, Maryland, read "Death to Obama". Just to emphasise his point, a second message was also scrawled on the cardboard placard. "Death to Obama, Michelle and 2 stupid kids," it stated.
Welcome to the disturbing new face of the radical right in America. Across the country, extremism is surging, inflamed by conservative talkshow hosts, encouraged by Republican leaders and propagating a series of wild conspiracy theories. Many fear it might end in tragedy.

Obama has been labelled as a threat to democracy and an anti-white racist by senior presenters on the TV channel Fox News. Republicans, seizing on the fierce debate over Obama's plans to reform healthcare, have called him a socialist who plans "death panels" for the elderly. Rumours have circulated that Obama was not born in America and that he plans to ban firearms. Despite having no basis in fact, they have become widely believed. A recent poll in Virginia showed only 53% of voters believed Obama was born in the US. In neighbouring North Carolina, 54% of voters shared that opinion.

Such extremism is becoming a major security issue, prompting fears of an attack on Obama's life or some other incident of domestic terrorism. "This is a very dangerous situation that can spin off 'lone wolf' individuals who decide now is the time to act against people they see as an enemy," said Chip Berlet, author of a book on rightwing extremists.

Federal authorities have launched a programme to try to detect any individuals who might be planning rightwing attacks similar to those that in recent months have killed a Kansas abortion doctor and a black security guard at Washington DC's Holocaust Museum.

At the same time, the watchdog group the Southern Poverty Law Centre has issued a report that warns of rising numbers of potentially violent rightwing militia groups. The number of hate groups has grown from 602 in 2000 to 926, the organisation found. Its report quoted one senior federal law enforcement official, Bart McEntire, as saying: "This is the most significant growth we've seen in 10 to 12 years. All it's lacking is a spark."

Many experts believe that spark is no longer missing. Critics say that Republican politicians have let loose a wave of anger tied to the healthcare debate. Fuelled by racial issues and the economic crisis, it may be impossible to control. "The idea that they are going to be able to control what they have unleashed is plain wrong," said Professor James Corcoran of Simmons College, the author of two books on US domestic terrorism.

Republican leaders have moved to scupper Obama's healthcare plans by inflaming myths and lies about the system. Sarah Palin has refused to back away from her comments over "death panels" despite the fact that the part of the healthcare bill she is referring to does not set up such things and was drawn up by a fellow Republican. Other Republicans have been equally vociferous in attacking Obama.

Iowa Senator Chuck Grassley warned his constituents that Obama's plan could "pull the plug on grandma". Former senator Rick Santorum, who is a possible 2012 presidential hopeful, recently sent out an email warning that Obama was "determined to remake America as a socialist utopia". Oklahoma congressman John Sullivan told supporters in his home state that Obama was creating an "enemies list" of those opposed to healthcare.

The cacophony of gibes and unfounded claims is loudest, however, on rightwing TV and radio. Fox News presenter Glenn Beck, who last week came to British attention following a negative interview about the NHS with Conservative MEP Daniel Hannan, has claimed Obama dislikes white people. "This guy is, I believe, a racist," Beck said. Beck has also discussed allegations that Obama is setting up a network of secret internment camps and joked about poisoning Democratic congresswoman Nancy Pelosi. Meanwhile Rush Limbaugh, whose weekly radio show is listened to by millions of Americans, has compared the Democrats to the Nazi party. Perhaps taking him at his word, some healthcare protesters have carried signs featuring swastikas and Obama with a "Hitler" moustache.

It is in the so-called "birther" movement that the radical right has gained the most traction. The myth, which has been debunked, holds that Obama was not born in America. Numerous Republican politicians have floated the idea based on the false allegation that Obama cannot provide a birth certificate. The theme has been picked up by the media, including mainstream outlets such as CNN. Experts say such rhetoric inflames individuals who might already be planning acts of violence. "It is a climate where extremists in society will start to believe their views are mainstream," said Corcoran.

The SPLC report warns that the militia movement in the US had a long history of smaller attacks in the 1990s, leading up to the terrorist bombing of a federal building in Oklahoma City by Timothy McVeigh in 1995. It believes the same pattern could be about to repeat itself and points to numerous incidents in recent years. Last week, William Kostric, a gun-rights advocate, turned up at an Obama town hall meeting in New Hampshire with a loaded handgun strapped to his leg.
Some were more worried, however, by the sign that Kostric carried which referred to a Thomas Jefferson quote about refreshing the "tree of liberty" with the blood of patriots. That was the same quote on a T-shirt McVeigh was wearing when he was arrested.

Barack Obama
Posted by Howard Martin at 6:19 AM