Viaduct: 'The state is building that tunnel' 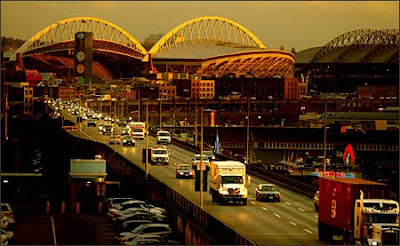 Mayor Greg Nickels says challenger Michael McGinn's desire to tear down the Alaskan Way Viaduct and disperse traffic on surface streets would cost the city just as much as replacing it with a tunnel -- $930 million.

McGinn disagrees, and says with so much money on the line Seattle voters should have a chance to vote on the tunnel option.
All this talk is just so much noise to Rep. Judy Clibborn, D-Mercer Island, who chairs the state House Transportation committee.

"The state is building that tunnel," she said in an interview. "It's a done deal."

A week before the Aug. 18 primary much of the discussion in the mayor's race is centered on the viaduct, the aging, double-decker roadway that carries more than 100,000 vehicles a day along Seattle's waterfront. People have been arguing about the viaduct since a Feb. 28, 2001, earthquake further damaged the span, leading engineers to say the structure must be replaced or made stronger.

Tunnel agreement, despite 'no' vote

Earlier this year the Legislature approved the $4.2 billion tunnel replacement option, on which Nickels, Gov. Chris Gregoire and King County signed off. The state has agreed to pay $2.8 billion for the project, including $1.8 billion for the bored tunnel itself.

McGinn has made opposition to the tunnel the main point of his campaign and this week Nickels' campaign went after the former Sierra Club leader directly, vowing to call thousands of city voters to combat McGinn's "distortions" on the subject. Recent polling show Nickels ahead in the mayor's race, but by an uncomfortably small margin. McGinn is in third place, polling shows, with T-Mobile executive Joe Mallahan in second. The top two finishers in next week's primary move on to the general election.

Many voters may feel as if they've already heard enough about the viaduct issue.

In 2007 Seattleites were presented with a convoluted ballot measure asking them how they wanted to replace the viaduct. They were asked to choose between a surface-tunnel hybrid and an elevated structure. They rejected both options. McGinn's preferred surface-only replacement was not on the ballot.

McGinn has seized on the 2007 vote, saying that Nickels is foolish to pursue the expensive tunnel option, which 70 percent of city residents rejected. In this bad economy the $930 million the city will spend could be better used on many other initiatives, McGinn says.

Nickels' campaign spokesman, Sandeep Kaushik, counters by saying McGinn is misleading voters. They'd still have to spend $930 million, even if plans for a tunnel were scrapped and a surface-only option was chosen.

"In the best case scenario (i.e. state does not back out entirely, and agrees to fund a portion of the surface option) Seattle would be on the hook for all the improvements to local streets and other local improvements it has agreed to -- $936 million," Kaushik said. "More likely the state would pull back the $2.2 billion of the $2.8 billion they have committed, and Seattle taxpayers will be on the hook for billions more than they are now."

"We can widen I-5, add transit service, improve the waterfront and repair the seawall within $2.4 billion," he said. "It is simply not true to say that the city has to spend the same amount regardless. When you pick the most expensive option like Nickels did, it costs the city more."

McGinn also doesn't think the state would take its $2 billion back. "The $2 billion was approved by the voters as part of the I-912 vote in 2005 (when voters upheld a gas tax increase). I really don't think elected officials should threaten voters when they don't get their way. In a democracy, that confuses who is in charge."

However the vast majority of money coming from the state is from the gas tax. Gas tax revenues must be spent on supporting highway programs, so state money almost certainly could not be spent on transit service and the seawall replacement.

And any decision on the viaduct would have to be approved again by the state, because State Route 99 is a state highway.
For Clibborn, the debate is over.

"The state will build the tunnel," she said.

Howie P.S.: I believe Joe Mallahan agrees with Clibborn on this.
Posted by Howard Martin at 3:38 AM

Email ThisBlogThis!Share to TwitterShare to FacebookShare to Pinterest
Labels: viaduct